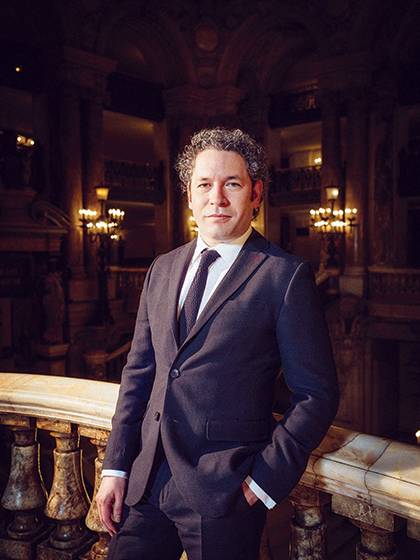 LA Phil Music Director Gustavo Dudamel is taking an additional position with the Paris Opera for at least the next six seasons. (photo by Andrew Ousley)

The Paris Opera and its General Manager Alexander Neef announced that Grammy Award-winning conductor Gustavo Dudamel, who has served as the music director for the Los Angeles Philharmonic since 2009, will simultaneously join as the opera’s music director for six seasons starting in August.

“I am extremely happy that Gustavo Dudamel has accepted my invitation to join the Paris Opera as music director. He is one of the world’s most talented and prestigious conductors,” Neef said. “I was drawn from the outset to this exceptional conductor who has been fascinated by the world of opera since his early childhood and has conducted numerous operatic works with such musical insight. Over the past 10 years, I have had the good fortune to hear him in the Mozart/Da Ponte trilogy at the helm of the Los Angeles Philharmonic, as well as in works by John Adams and more recently in Verdi’s Otello at the Metropolitan Opera in New York and at the Liceu in Barcelona. I was won over by his conducting, as were his audiences. In the course of our numerous exchanges, I realized the extent to which he was the one who could share and transmit his love of opera to the widest possible audience.

“His appointment reflects our determination to reach out and commit ourselves to an ambitious project that will continue to enhance the reputation of our institution through opera and ballet productions, along with symphony concerts not only in our theaters, but elsewhere, in a repertoire ranging from classical to contemporary. His proven commitment to artistic and educational projects and his conviction that culture should be accessible to all will provide new momentum and accompany us in our mission,” Neef continued.

“From the first downbeat, my experience with the artists of the Paris Opera was simply magnificent. The immediate sensation at that decisive encounter – feelings of trust, connection, musicality and a shared vision – were born from this first meeting in 2017. The exceptional level of the musicians of the orchestra and the artists of the chorus and the strong bond that we were able to weave together during the rehearsals and the performances of La Bohème are what made me accept Alexander Neef’s proposal,” Dudamel said.

“The orchestra is a microcosm for society, with many people playing different parts towards one common creative goal. The opera is an entire universe unto itself, containing the full multitude of what the human spirit is capable of creating. Alongside my continued commitment to the Los Angeles Philharmonic and to the beloved musicians of El Sistema in Venezuela and around the world, I want to devote, for at least the next six seasons, all my energy toward creating extraordinary musical moments for our audiences, and to make the Paris Opera ever more connected to the soul of the city and country that surrounds it,” he continued.

MOCA to reopen on June 3