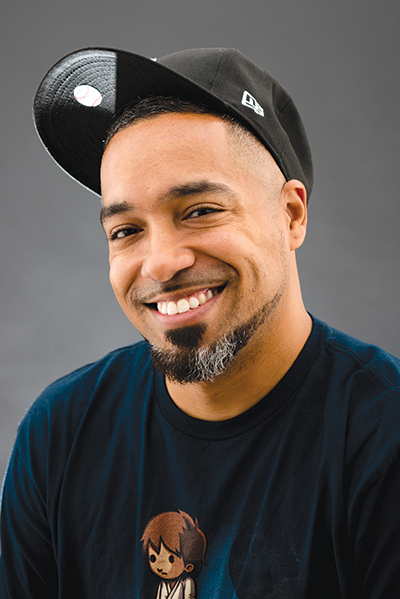 National Poetry Slam champion Shihan Van Clief will serve as director of the “L.A. Get Down Festival.” (photo by Neil Raja)

Workshops and film screenings will be held online via Zoom. Performances will be streamed online for free viewing at twitch.tv/greenwaycourttheatre.

The festival will also feature the first-ever “Drive-in Poetry Showcase” on Sunday, April 11, at the Melrose Trading Post, 7850 Melrose Ave., on the campus of Fairfax High School. Admission is $10 per car.

“After a year of the COVID-19 pandemic, social injustice protests and a tumultuous election, poetry has been a powerful art form for healing and transformation. U.S. Poet Laureate Joy Harjo recently said in [an] interview that a poetry surge isn’t new, but a renaissance could be coming,” said Whitney Weston, co-founder and co-artistic director of the Greenway Arts Alliance.

“Greenway is thrilled to be presenting the fifth annual L.A. Get Down Festival in celebration of National Poetry Month, and to once again have acclaimed and National Poetry Slam Champion Shihan Van Clief serve as festival director,” added Pierson Blaetz, Greenway Arts Alliance co-founder and co-artistic director. “Shihan continues to bring the festival electrifying performances by many of the nation’s best spoken word and hip-hop theater artists along with inspiring and motivating writing workshops for free.”

The festival will introduce the inaugural L.A. Get Down Festival Playwrights Group on April 16, including playwrights Tahirih Moeller, Arianna Basco, Jasmine Williams, Alex Alpharaoh and Franky Gonzalez. The inaugural group will work on new full-length plays over the next year, with readings to be presented during the 2022 festival. The group is focused on advancing spoken word and hip-hop theater through the long-term cultivation of new work. Greenway Court Theatre producing director Tiffany Moon will serve as facilitator of the group. The inaugural event will be streamed on twitch.tv.

“Greenway has lived at the intersection of spoken word and theatre since its founding in 2000. We have been wanting to create a formalized way to support the next generation of hip-hop theater artists for some time now and have used the pause of the pandemic to conceive and launch a writers group dedicated to creating new plays utilizing hip-hop and spoken word in their conception, their extrapolation and their experimentation,” Moon said. “These five artists have been working at these intersections for some time, and we are thrilled to be able to offer them a home where they can create new full-length plays in a cohort of like-minded creators.