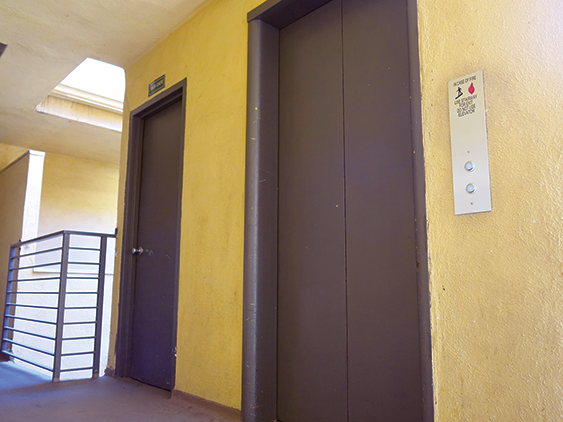 The West Hollywood City Council voted to amend an ordinance that requires landlords to provide relocation benefits to tenants temporarily displaced from their units to include inoperable elevators as a basis for relocation.

The unanimous vote during the April 5 council meeting also establishes reasonable per diems for accommodations and other temporarily lost amenities for all reasons for relocation, and requires that the accommodations be provided to disabled or elderly residents when elevators are inoperable for more than 24 hours.

“I think we’ve all received more emails than we care to ever relive about inoperable elevators in any number of buildings around the city and the issues that they cause, especially when it’s in a building for people who are living with different abilities or other issues,” Mayor Lindsey Horvath said. “I think that’s an issue and it’s something that I’m glad we’re addressing.”

The vote came as a result of recommendations from the Rent Stabilization Commission regarding inoperable elevators. The commission sent a letter to the council recommending updating the ordinance, while also adding elevators to the regular inspection list and increasing fines for inoperable elevators that are not fixed, among other changes.

While the council vote only made changes to the ordinance, those suggestions received support from the council members, who said that inoperable elevators have been a longtime problem in the city, especially for elderly residents.

“It really does impact the residents,” Councilwoman Lauren Meister said. “People can’t age in place if they can’t take an elevator when they pick up their groceries.”

It determines no further than two miles from any city border to be a fair location for a temporary dwelling, and sets reimbursement for hotel accommodations (determined annually based on local rates), meal reimbursement ($55 per day person), laundry allowances ($2 per day if dwelling has in-unit services), and pet allowances ($59 per day per dog; $41 per cat, for animals that can’t be kept at a new unit). The ordinance also allows tenants the option to remain in their residence and be reimbursed for delivery fees should they not have to vacate.

The amendment change “clarifies landlord obligations when relocation is necessary to avoid disputes, includes inoperative elevators as a basis for relocation and provides for a more robust enforcement mechanism when landlords fail to meet their obligation to displaced tenants,” according to a staff memo.

Councilman John D’Amico asked for clarification on what is considered uninhabitable.

“I guess if the main sewer line to the street is broken and it’s broken for two days and it’s not red-tagged, are you saying the landlord has to move all 10 units to a hotel?” he said. “If the city doesn’t issue something, then the landlord doesn’t have to act?”

Jonathan Holub, acting rent stabilization and housing manager, said it applies  “for any reason that the unit would be uninhabitable.”

“Anything that the landlord is going to be doing either voluntarily or as a result of a governmental order that renders the unit uninhabitable would trigger the ordinance,” he said. “If it’s habitable, then it’s habitable. If it’s not, then that would render the unit subject to a red tag.”

The amendment will be brought back at a later council meeting for a second and final vote.