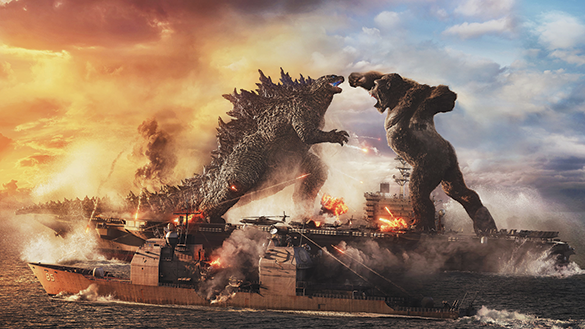 Humans are dumb, according the latest installment of the “Godzilla” and “Kong” rebooted series. They’re boring, an obstacle to the real prize. They probably shouldn’t be so tedious in a kaiju film pitting the ultimate titans against each other, but “Godzilla vs. Kong” goes that route, presenting empathetic monsters decimating skyscrapers while puny Homo sapiens feel more anthropoid.

Perhaps humanizing monsters at the expense of people is a cinematic win for director Adam Wingard (“You’re Next,” “Blair Witch”). But it sure feels like a small step for the rest of us spending too much time following charmless characters explaining the plot loosed from personalities.

Still, the fourth film in Legendary Entertainment’s MonsterVerse is hardly unwatchable, encompassing the best and worst of this franchise. Perhaps the real treat of watching a film like this at home on HBO Max is the ability to pause or fast forward through a number of scenes that don’t include a towering monster.

Considering where things began, this is a shocking proposal. All those epic battles in 2014’s “Godzilla” and the absurd charms of “Kong: Skull Island” created a promising world. Then “Godzilla: King of the Monsters” got weird.

It blew through too many familiar kaiju to set up this epic showdown. One of the worst parts continues here: dumb humans in a landscape far more interesting than who graces the screen. Much of the world remains in recovery from the events of Godzilla’s sophomore debut. Twice now, the enormous creature has proven to be a force for good, bringing balance, protecting all species – dumb mortals included – from nature and more vicious foes.

Then the water-dwelling electric fire breather starts attacking major cities at random. According to his fans, like Madison Russell (Millie Bobby Brown), who witnessed the green dude save the world once before, these attacks have a purpose. Nobody else seems to care, save a couple misfits in a subplot that only matters for a brief moment in the third act.

The special effects and CGI make the action incredibly real in “Godzilla vs. Kong.” (photo courtesy of Warner Bros. Pictures)

Godzilla’s behavior is especially concerning for those keeping watch over the other surviving titan, Kong, who is quickly outgrowing his hidden dome on Skull Island. So members of Monarch, the once secret group monitoring the titans’ activities, seek to transfer Kong to a passageway possibly leading to the home of the titans long ago. Of course, Kong doesn’t arrive without a hiccup, or lightning breath attack, to be more exact.

The latest one includes a few familiar faces, particularly “Stranger Things’” Brown reprising her role as Madison, and my wife’s boyfriend, Alexander Skarsgård, playing a dopey scientist. But the real stars here are not the actors – those empty vessels of exposition channeling obnoxious tropes poached from disaster movies.

That’s all forgiven once the titans clash, though such moments are rare. Luckily, Kong’s journey traverses an undiscovered country ripped from Jules Verne’s greatest hits. If future films arrive, hopefully this is the new setting. Give metropolitan cities a break.

The CGI has greatly improved since the dynamic monster duo’s first rumble in the streets in 1962, “King Kong vs. Godzilla.” They look incredible, with facial expressions unseen in such digital monsters, Kong the lonely soul in search of home, while Godzilla seems to be all rage. No spoiler to say that’s not the whole story, but just watch for yourself to see how over-the-top this one gets. It might work for you. It might not.

It seems the entire franchise has led to this grandiose moment, so what happens next is entirely up for grabs. Legendary execs have hinted at a possible “Pacific Rim” crossover (the studio produces both properties), which makes complete sense considering this franchise’s slow move into a dystopian future.

Frankly, there doesn’t seem to be anyone left for Kong or Godzilla to fight, so why not go off world or send those creepy critters here? The rest of us are so hard up to see a blockbuster that this goes down just fine, once those annoying humans move over.