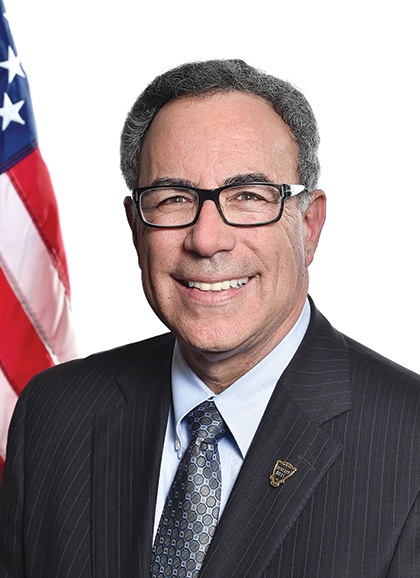 The COVID-19 pandemic caused a public health crisis and widespread economic issues, and the city then became the site of numerous protests, first after the death of George Floyd and then by supporters and opponents of the candidates in the 2020 presidential election.

Friedman said despite the unique challenges of 2020, he still found success in his expected goals of forging unity in the community, “working toward our goal of getting everybody together and working together.”

“We never really quite got to that, because as we started, we were hit with the COVID pandemic and then we had the political issues in our city, but all in all, I would say it was successful because I think we did as a community come together in the end, not exactly in the way I would’ve seen it from the beginning, but we did all come together,” Friedman said.

Friedman also touted the city’s progress on some long-simmering issues, such as the mixed-use ordinance; Measure RP, which protects the city’s ability to retain sales-tax revenue if another entity – such as Los Angeles County – were to increase its sales tax; and the medical-use ordinance, which will make it easier for commercial space to be used by doctors, surgeons and other medical professionals.

“We know we’re going to have some available office space and we’d like to get it used. If we expand medical use to some limited degree, that will alleviate some of that vacancy issue,” Friedman said.

Friedman declined to select one success has his favorite – “I treat my children all the same way,” he said – and he listed the city’s coronavirus-related measures among his accomplishments, such as the Open BH program, which allowed businesses to operate outdoors. Friedman was also quick to give credit to his colleagues.

“I think being mayor and leading the city was an experience I enjoyed in the end,” he said. “I thought I did a good job, but I couldn’t have done it without the council members to assist me.”

During the installation ceremony on April 6, Friedman’s colleagues agreed with Friedman’s assessment and returned the compliments.

“Working with our staff and consulting with the rest of the council, you charted a course through chaos that was thoughtful, deliberate and tempered,” Councilman Julian Gold said to Friedman. “You helped keep this community safe from disease and from the unrest that was around us, and you made people feel secure, and that’s the best that they can feel.”

“This past year under your term, our community and our world faced challenges that no one could ever predict, and there was no road map for how to approach it … Honestly, Les, we have you to thank for getting us to this place,” Councilwoman Lili Bosse added. “Our community was so lucky that you were our mayor this year.”

Now, Friedman is back to serving as a council member, and he had advice for his successor, Mayor Bob Wunderlich, though he declined to divulge the details of their exchange.

“I did tell him there was a significant commitment in time that is greater than that of being a councilman. I told him to be prepared for it, but to leave time for his family also,” Friedman said.

As for how his first term as mayor is remembered, Friedman, as he is known to do, referenced one of his mentors, legendary UCLA basketball coach John Wooden.

“He tells all of us, if you ever get too high, there’s usually a corresponding low,” Friedman said. “Keep an even temperament all the way through, and you’ll be able to deal with things in an even manner. If anything, I would ask people to look back and see that I dealt with things in that manner.”