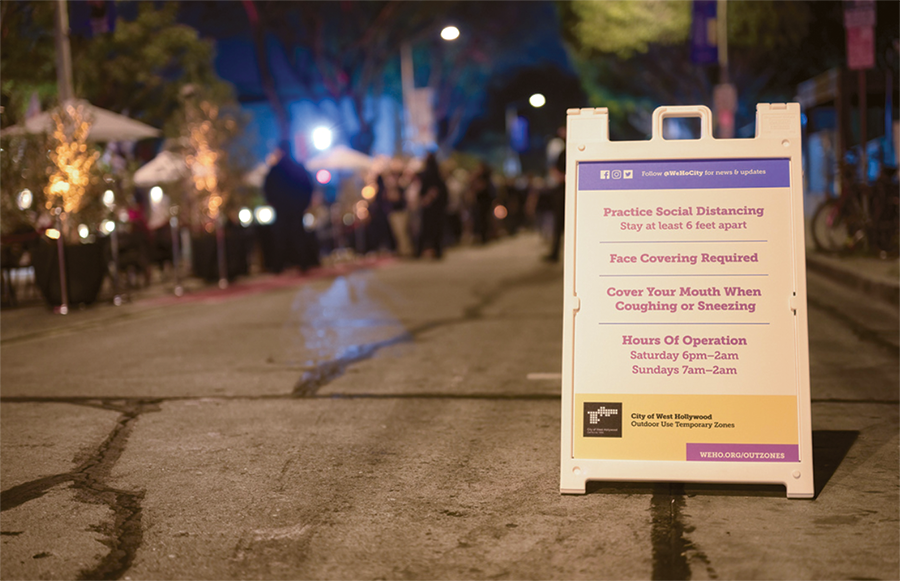 Both neighbors and city officials reported that the first weekend of the Robertson Boulevard closure to traffic was conducted with minimal issues. (photo by Jon Viscott/courtesy of the city of West Hollywood)

The city of West Hollywood launched its OUT on Robertson pilot program last weekend, and both the city and adjacent residents reported that the effort to close a popular stretch of dining and nightlife to vehicles was conducted with limited issues.

The first weekend represented a small-scale version of the vision for the area after the three-month pilot program was passed unanimously by the West Hollywood City Council in February. A full-scale grand opening is on track for May 1.

The city closed North Robertson Boulevard between Santa Monica Boulevard and Melrose Avenue last Saturday and Sunday, with only one business – the Abbey Food and Bar – moving operations outside and into the street.

The city is hoping the Outdoor Use Temporary Zone – a program that was established during the pandemic as a way for businesses hit hard by the coronavirus pandemic to operate while adhering to county health requirements – will allow the stretch along Robertson to become a place for a variety of uses, whether it’s for yoga classes, vendors to set up temporary stalls or businesses on the street to operate outside.

“Closing this highly trafficked and bustling stretch of Robertson will provide a pedestrian-safe space that allows for appropriate social distancing as the Public Health Department eases capacity restrictions while still monitoring the spread of the virus,” Councilman John Erickson said in a statement. “COVID is not over and we all must remain vigilant about protecting our own health and the health of others.”

“The coronavirus pandemic has forced many of our local businesses to drastically alter how they serve the public. This has had a profound impact on the city of West Hollywood’s business community and has added to the economic challenges wrought by COVID-19,” Councilman John D’Amico said. “Keeping our community safe, healthy and thriving is priority one. Creating safe, socially distanced outdoor spaces for expanded operations is a creative approach that will help West Hollywood’s businesses, residents and visitors as we continue to respond to the evolving pandemic.”

City officials who were there during the “soft opening” found there was a “significant improvement” in pedestrian and traffic congestion at both intersections, as well as less congregating of groups on the sidewalks, according to Paolo Kespradit, management specialist for the city of West Hollywood.

“We definitely saw an increase of people walking in that area,” Kespradit said. “The traffic flow was much better because people weren’t making a right or left turn and competing with pedestrians.”

In terms of parking, more than 500 cars parked in the five-story city-owned West Hollywood Park structure, along with more than 150 cars in the private parking lot at La Peer Hotel. They didn’t observe any parking issues in adjacent neighborhoods, and Uber and Lyft drop-off areas along Santa Monica Boulevard did not result in increased congestion, Kespradit said.

“Overall, those were our high-level main observations,” he said. “Obviously as we continue through this pilot program, we’re going to continue to make adjustments. … I would give us a good rating on this first weekend.”

Adjacent neighborhoods, where residents have been critical of the program, fearful that it will bring additional traffic, congestion and noise, reported minor issues with music being too loud, according to Manny Rodriguez, the vice president of the West Hollywood West Residents Association. The street was also prematurely closed at 4:30 p.m. on the first night, ahead of the scheduled 6 p.m. closure.

Both he and Kespradit said that those issues were remedied quickly, the latter by city staff who removed the closure signs and replaced them at the correct time, and the former with the help from code enforcement.

“They complied and that was fine from what I heard,” Rodriguez said.

Kespradit said that there are already plans to expand the amenities in the area in time for next weekend. In addition to the Abbey’s expansion, they’ll be hosting a gelato festival, a fundraiser for Project Angel Food and a yoga fundraiser for Aid for AIDS.

He said that press interest in covering the OUT Zone prompted more than 50 businesses to reach out to the city to ask how to participate in the program.

“We kind of wanted to start slow,” he said. “The interest has just grown.”

For Rodriguez, he said that it’s hard to make a judgment on the program because it was just one weekend, but that he hasn’t heard any complaints from neighbors like those that were expressed during a meeting with Kespradit and other city officials in April.

“There’s a lot that needs to be seen. They’re still piloting it and still trying it out,” he said. “It’s hard to make a judgment at this point. It was just one weekend. … So we’re just waiting to see as it moves forward.”

Kespradit said that they’ll continue to work with the business community and residents to both make them aware of the program, should they want to participate, while also listening to feedback to address any concerns.

“We are always looking for additional vendors and additional comments especially during this time,” he said.