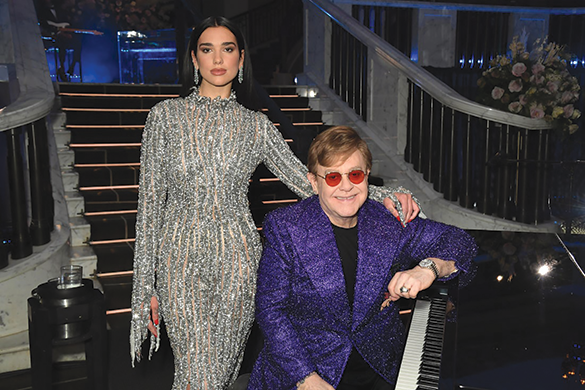 The foundation’s first-ever virtual gala took place on Sunday, April 25, and featured a performance by Grammy Award-winning recording artist Dua Lipa and appearances by special guests, including Lady Gaga, Cynthia Erivo and the cast of “It’s a Sin.” For the first time, supporters worldwide were invited to attend the Oscar party by joining a 60-minute pre-show special produced by Fulwell 73 at Rosewood London.

Guests at the pre-party received a welcome from John and Furnish, as well as special appearances from Olly Alexander, Nathaniel Curtis, Omari Douglas, Cynthia Erivo, Callum Scott Howells, Elizabeth Hurley, David Williams, Lydia West and others. Harris brought humor to the show and Dua Lipa lit up the virtual party with performances of her chart-topping hits including, “Levitating,” “Pretty Please,” “Hallucinate” and “Don’t Start Now.” Guests were also treated to duet with John and Dua Lipa performing “Bennie and the Jets” and “Love Again.”

The live Oscars telecast portion of the evening was hosted by Emmy Award-winning actor Eric McCormack and featured a performance by country singer MacKenzie Porter for donors and supporters.

“We haven’t missed a year yet and we certainly weren’t going to miss our 29th annual Oscar Party to benefit my foundation – even if it meant going virtual,” said John, founder of the Elton John AIDS Foundation. “It was so much fun to perform with the gorgeous Dua Lipa and open up our party to supporters all over the world. I’m so grateful to Neil for hosting, everyone who attended and all my friends who participated so that we could continue this legendary event to raise vital funds to end the AIDS epidemic.”

KCCLA focuses on harmony to commemorate of L.A. Riots