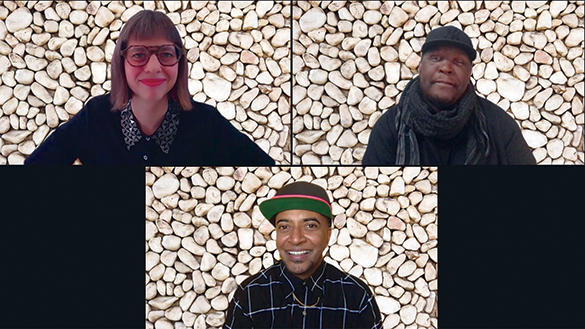 Center Theatre Group’s Dorothy and Richard Sherwood Award will go to two artists, D’Lo and Mikaal Sulaiman, recognizing and celebrating them for their exceptional contributions to the Los Angeles theatre landscape and their work as innovative and adventurous artists.

Paying tribute to the memory of Dorothy and Richard Sherwood, the $10,000 award aims to cultivate innovative theater artists working in Los Angeles who push formal and aesthetic boundaries and demonstrate dedication to improving their respective artistic fields. Both recipients will receive the full $10,000 award. The additional finalist, Lena Sands, will receive a $2,000 honorarium.

“Each year we have the difficult task of selecting a single Dorothy and Richard Sherwood Award recipient out of the impossibly deep pool of talented theatre creators working in Los Angeles,” Center Theatre Group Artistic Director Michael Ritchie said. “I am thrilled that the Sherwood family made it possible for us to extend the award to two artists this year and look forward to working with D’Lo and Mikaal Sulaiman.”

“My mother and father shared a deep love of the arts and acted on that shared passion as they championed young artists and innovative new work. I know that they would agree that these challenging times require a redoubling of our dedication to the artists that will move theater into the future. My sister Elizabeth and I are happy to announce that this year we will expand the Dorothy and Richard Sherwood Award to include two recipients,” Ben Sherwood said.

D’Lo is a queer/transgender Tamil-Sri Lankan-American actor/writer/comic whose work ranges from stand-up comedy, solo theatre, plays, films, short stories and poetry. His solo shows “Ramble-Ations,” “D’FunQT,” “D’FaQTo Life” and “To T, or not To T” have toured theaters and festivals nationally, and he is a regular performer/speaker on the college/university circuit. He is currently working on his latest solo called Queer Noise with support from Center Theatre Group’s Library Series and L.A. LGBT Center. His work has been published or written about in academic journals and anthologies, with features in The Guardian, NBC and The Advocate. He created the “Coming Out, Coming Home” writing workshop series with South Asian and/or immigrant LGBTQ Organizations nationally. His acting credits include: “Looking,” “Transparent,” “Sense8,” “Mr. Robot,” Connecting and Issa Rae-produced “Minimum Wage.” Currently, he has a series based on his life that is set up at BTR Media and Paul Feig’s Powderkeg Media. Most recently, D’Lo was awarded the Artist Disruptor Fellowship through the Center for Cultural Performance and 5050×2020 an initiative started by Joey Soloway, and he is also a Civic Media Fellow through USC’s Annenberg School of Innovation funded by the MacArthur Foundation.

Since 1996, Center Theatre Group has recognized and celebrated local theatre artists with the Richard E. Sherwood Award. In 2018 Dorothy Sherwood, Richard’s wife and fellow champion of innovative and adventurous theatre artists, passed away. To honor the passion and dedication of both patrons of the arts, the award was renamed the Dorothy and Richard Sherwood Award.

Dorothy and Richard Sherwood were patrons of the arts with a special appreciation for artists who are in the vanguard of theater. Richard was president and then chairman of the Center Theatre Group Board of Directors from 1980 until his passing in 1993. The award is established as an endowed fund at Center Theatre Group by their family, friends, colleagues and fellow board members, to honor the family’s passionate commitment to theatre. Dorothy Sherwood was deeply involved in the curation and selection process, hosting salons at her home for many of the artists, traveling to theaters around Los Angeles to support new work, and ensuring that the award would truly help recipients.

Explore the Getty at home