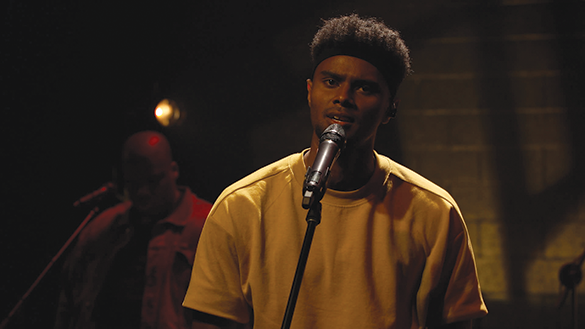 Sugi Dakks performs in the second episode of “Not a Moment, But a Movement,” titled “Black Nourishment.” (photo courtesy of Center Theatre Group)

Center Theatre Group, the Fire This Time Festival and Watts Village Theater Company announced the second episode of “Not a Moment, But a Movement,” a series of events that amplify and center Black artists.

Directed by Tyrone Davis and Bruce A. Lemon Jr. and introduced by Ron Cephas Jones, the second episode, titled “Black Nourishment,” features a local musician and the work of spoken word artists and muralists from throughout the United States in a program that premieres on demand beginning April 15 at 5 p.m., and is available through June 15.

The video will be free to Center Theatre Group subscribers and supporters and $10 for all others – except April 15 through April 30, when the event will be offered free to the public in honor of National Poetry Month. “Not a Moment, But a Movement” “Black Nourishment” will be available at CTGLA.org/NotAMoment.

“Not a Moment, But a Movement” events feature the work of multiple artists from varied disciplines. Each of the artists offers their own distinct voice, which blends with, builds upon and sometimes clashes up against the other voices to create a unique piece that centers conversations that have long been held to the periphery. Each event is paired with a panel discussion to create a uniquely comprehensive cultural experience. The panel for this second episode of Not a Moment, But a Movement titled “Sustaining the Movement: Elevating Black Artists,” will be held on April 15 at 4 p.m. at YouTube.com/CTGLA. Panelists include Zhailon Levingston (Broadway Advocacy Coalition), Jamila Webb (First Fifteen) and Courtney Peck (Cast Black Talent), with moderator Lemon Jr.

“Drawing on spoken word artists from Atlanta, Cleveland, Oakland and Los Angeles, this second episode of ‘Not a Moment, But a Movement’ titled, ‘Black Nourishment’ explores what it means to be nourished as a Black person in America,” said Davis, Center Theatre Group’s associate artistic director.

“There are so many stories to tell and even more ways to tell them,” said Lemon Jr., Watts Village Theater Company’s co-artistic director. “Together with the previous episode, this continues the conversation we are having as a community and connects the many ways we can do it in theatre.”

Vintage: Welcome back to campus