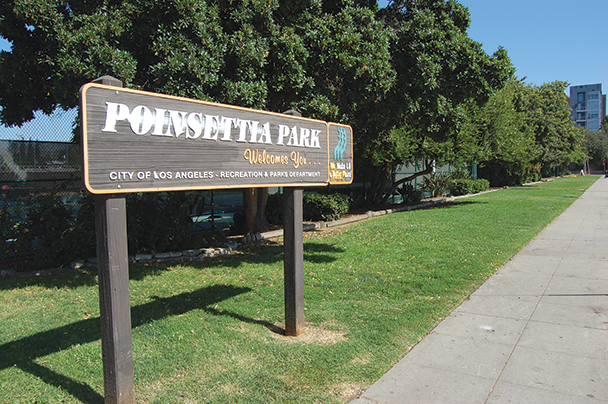 The community garden would replace a grassy area running between the tennis courts and sidewalk along Poinsettia Place. (photo by Edwin Folven)

Plans to create a community garden on the east side of Poinsettia Park are starting to bloom as the Mid City West Community Council recently released a design for the project and is gathering public input.

The garden would be located on an area between the tennis courts and sidewalk along Poinsettia Place, just south of Romaine Street. The 18-foot-wide area is more than 100 feet long, allowing for 25-40 gardening plots at either end, as well as a community space in the middle for outdoor gardening classes and other gatherings. Two walkways to the tennis courts would be preserved. The plans also call for two gardens featuring California native plants, seating and decomposed granite paving in the open spaces.

The effort is being led by Mid City West Community Council member David Sobel, who originally envisioned the project in 2018. Sobel said it took months to receive approvals from different divisions within the Los Angeles Department of Recreation and Parks. Just as he reached the design phase, the pandemic hit, causing further delays.

Sobel said he kept the idea alive, and the Mid City West Community Council recently hired landscape architect Dean Howell, of Gruen and Associates, who created a design and rendering. The next step is gathering more public input before the plan is presented to the Board of Recreation and Park Commissioners, which has the power to grant final approval. Sobel said a date has not been set for consideration by the commission.

“It’s been a long process,” he added. “Mid City West is seeding the garden, no pun intended, and from there, it’s finding a budget and getting the framework. Right now, we are taking public comment and we will hold a couple more meetings. We hope to get approval as soon as possible.”

Details including who will be eligible to plant in the garden, time periods between turnover at plots, costs, fees and other rules have yet to be determined. Sobel said the goal is to create a community-oriented space where people come together over gardening.

“It’s a super-dense community and people don’t have a lot of outdoor space. The pandemic exposed the need for people to be able to get outdoors and the desire to do things like planting,” Sobel added. “It’s a great way to have community interaction and keep socially distanced while being outside as well, and to eat healthy. We see it as a place for the community, a hub.” 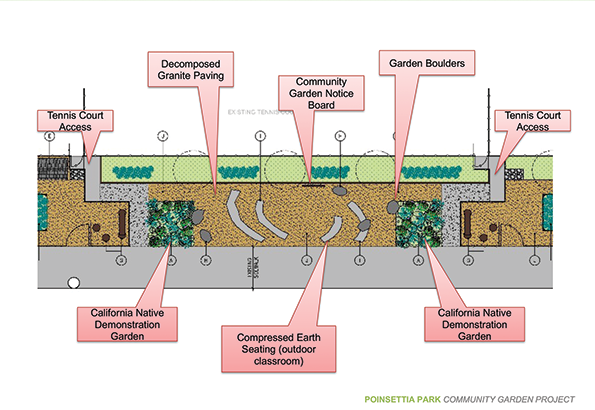 A rendering shows how the community garden would be configured at Poinsettia Park. (image courtesy of Mid City West)

Los Angeles City Councilman Paul Koretz, 5th District, supports the garden. Koretz sent a letter to the Department of Recreation and Parks in 2019 when the initial effort to create a community garden was launched, Koretz’s spokeswoman Alison Simard said.

“I believe this community garden would make a great use of otherwise underutilized park space and bring additional vitality to the park,” Koretz wrote in the letter.

“We’re supportive of what the community wants to do there,” Simard added.

Scott Epstein, outgoing chair of the Mid City West Community Council, helped get the initial effort started and remains committed to supporting the project as it moves forward.

“We are really excited about this,” Epstein said. “We have had a really enthusiastic response for the garden. It shows you can do a lot with small spaces.”

Sobel said information provided by the community will be used to refine the plan before it is presented to the city. For information and to provide input, visit forms.gle/qb9uHmpdxVHf5Mtc9.

City Hall illuminated in blue and white in tribute to Greece

Too much hard scape and no shade. Right now is at least grass.