Comedians stand up for local businesses 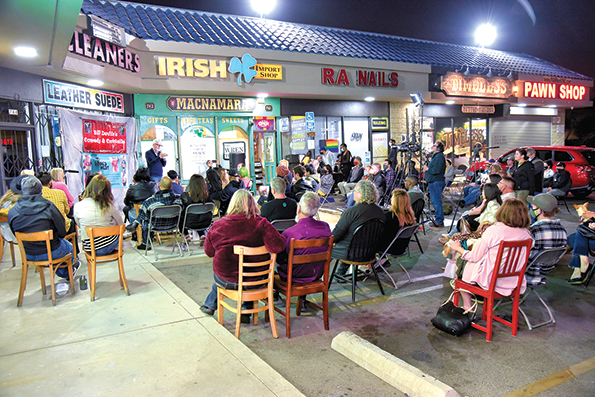 When Tom Bergin’s was forced to close by the coronavirus pandemic, it was the beginning of a stressful cycle of reopening for to-go service, followed by limited dine-in offerings and then more closures, said David Castagnetti, who operates Bergin’s with his brother, Francis Castagnetti.

“We were just trying to get these people their jobs back and offer the neighborhood something,” David Castagnetti said.

But necessity is the mother of invention, and even while indoor service was prohibited, Bergin’s found a creative way to draw customers: outdoor comedy nights.

“I think people are due for a good laugh,” Castagnetti said.

Other venues, some of them unconventional, are also offering outdoors, socially distanced comedy for the many performers who were mostly put out of work by the pandemic. Bill Devlin, who’s been doing comedy for about 20 years, said when the pandemic shutdowns began in March 2020, “everything came to a screeching halt.”

“At that time, we thought it was going to be a short time, a couple of weeks. Nobody was really that worried, but then everything kept getting extended,” he said.

Devlin tried a few different methods, such as livestreamed shows, but others, such as drive-in shows, haven’t proven successful with many comedians, Devlin said.

“People are honking at the comedians instead of laughing. That’s what the comedians get is a bunch of honking. If I want honking, I’ll do shows in front of a flock of geese,” he said.

Instead, he’s taken his Comedy and Cocktails show, which has been held at the Hollywood Improv and at the Ice House Comedy Club in Pasadena, to MacNamara Irish Import Shop in Hollywood. For a socially distanced crowd of about 65 people, Devlin and guests like Kevin Nealon and Jamie Kennedy are able to replicate the ambiance of a comedy club in a safe way. The next show is May 15.

Devlin said his friend and the store’s owner, Tom MacNamara, both benefit from the shows.

“The pandemic really hit his shop hard, and I thought well this way, I can help support him, we can have some fun and I have a lot of jokes about being Irish myself, so it all came together,” Devlin said.

Kennedy, known for movies like “Malibu’s Most Wanted” and television shows like “Ghost Whisperer,” said he enjoyed the experience of performing in Devlin’s show.

“We’re standing in front of an Irish import shop next to a Western Union, and the crowd was incredible. The feedback and the audiences are generous. They want it and the comedians want to perform for them, so there’s a real mutual admiration going on. There’s a renewed, ‘Wow, I’m really lucky to do this’ going on,” Kennedy said.

Patrick Keane, another comedian who has performed at Devlin’s shows, said performing outdoors isn’t quite the same, as there’s “a different vibe” without the “intimacy” of a club.

“But the good side is that audiences are, I’m finding, more appreciative and understanding. They acknowledge and recognize the overall situation, so they’re a little more giving with their laughter,” Keane said.

In a time when some in showbusiness have returned to working conventional jobs – Keane went from working on a TV show and on cruise ships to working for his high school in Orange County in alumni relations – the comics feel gratitude for being able to perform locally. For much of the past year, the in-person shows have been limited to other states with looser public health restrictions.

Now, Kennedy said, he realizes how “lucky I am to be able to perform.”

“I will definitely take it less for granted, that’s for sure, and the audiences, I never want to take them for granted. They proved that to me,” he said.

While the outdoor comedy shows have been a stopgap measure, and performances are likely to return indoors once the pandemic ends, the comedy nights may continue at Bergin’s and other venues that found a way to connect with their customer base.