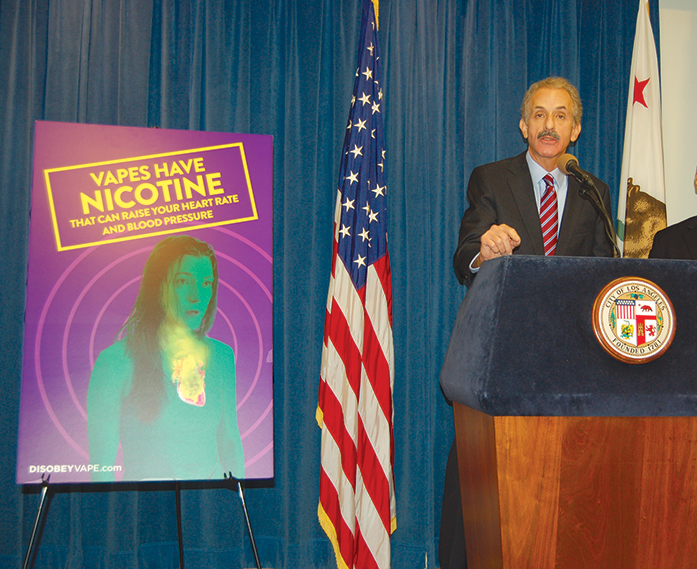 Los Angeles City Attorney Mike Feuer has secured a $1.2 million judgment against vaping device manufacturer Kandypens as part of a settlement in a 2018 lawsuit that alleged the company marketed tobacco products to youth.

“The tobacco industry spent generations making every effort they could to hook kids on traditional cigarettes. But then came the tobacco settlement, and pursuant to that, big tobacco was prohibited from marketing to kids. The vape industry has taken a page from big tobacco’s previous efforts,” Feuer said. “It uses shiny new e-cigarettes and flavored vapes to attract kids. We have a vaping epidemic. My office has been at the forefront to prevent the targeting of kids by vape companies.”

“We allege that Kandypens has engaged in youth-targeted marketing on social media platforms like YouTube and Instagram. We allege that they paid for product placement in music videos for artists with large teen followings like Justin Bieber and the 2019 Nickelodeon Kids’ Choice Awards host, DJ Khaled,” Feuer added. “Despite readily-available age-gating techniques, we allege that Kandypens did not previously restrict access to its social media and therefore, [people] under 21 had access to it. To give you an example, a city attorney investigator was able to purchase assorted tobacco products from the Kandypens website posing as a teen customer. At no time did the company verify date of birth or the age of our investigator.”

In addition to the $1.2 million in financial penalties, the settlement bars the company from engaging in youth targeted marketing. Kandypens is only allowed to advertise in adults-only entertainment venues and is prohibited from signing advertising contracts to market its products with anyone under 21. The company’s website and social media must be age-gated, meaning users have to click a button stating they are 21 or older. Additionally, Kandypens is precluded from using its logo on apparel.

Feuer said the settlement is significant because teen vaping is rapidly increasing. The city attorney cited studies that indicate 27.5% of high school-age students vape, and teens 15 to 17 years old are 16 times more likely to vape than adults 25 to 34 years old, he added.

“The reasons we are pursuing all these cases and our public education campaign, and the reason I wanted to highlight the very important result in this case, is that tobacco products, including flavored e-liquids, hook kids and they pose a public health risk,” Feuer added. “Our fight is to protect those kids from getting hooked in a new way, just as their predecessors got hooked a generation ago.”

Feuer also cited his office’s “Your Body Knows” public service campaign about the dangers of vaping, which launched in 2019 with a grant from the California State Attorney General’s Office. He also hinted at the prospect of more lawsuits.

“Our message to the vaping industry is clear,” Feuer said. “If you target kids in your marketing and advertising and you take other steps that enable kids to get access to your products, we are going to hold you to account.”

Police search for man who was last seen in Griffith Park

The Broad to reopen May 26