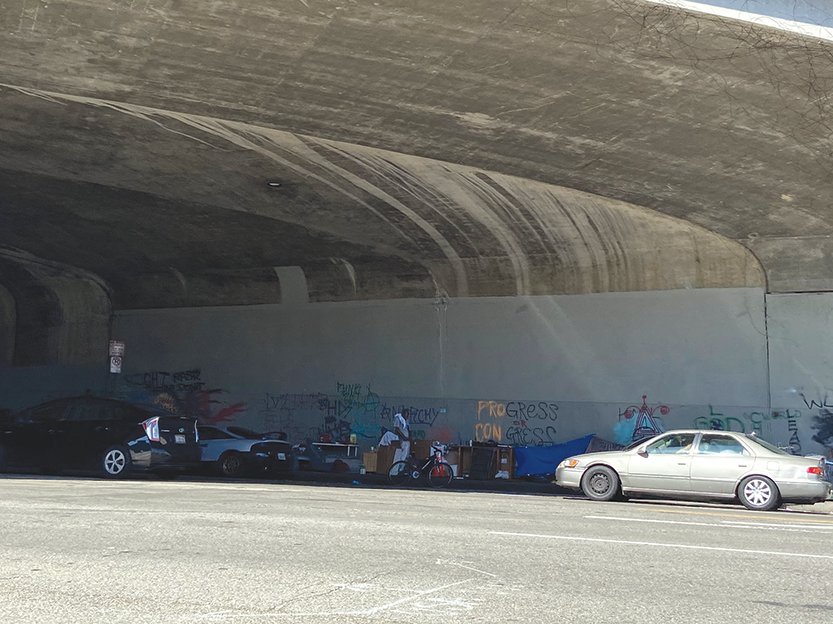 Homelessness is slightly down in Hollywood, a recent count found. (photo by Edwin Folven)

With homelessness seemingly on the rise throughout Los Angeles and a commitment by Mayor Eric Garcetti to include approximately $1 billion in the city’s next budget to address the issue, local leaders are hopeful about what appears to be progress in helping people living on the streets in Hollywood.

Hollywood 4WRD, a coalition of service providers and community advocates working to end homelessness, recently released the results of a count on Feb. 25 of unhoused individuals in Hollywood and east Hollywood. The organization, which conducts the annual count in Hollywood as part of an annual countywide assessment by the Los Angeles Homeless Services Authority, stepped in when LAHSA decided not to hold the homeless count in 2021 because of the COVID-19 pandemic. Volunteers with Hollywood 4WRD canvassed 40 census tracts in late February and found there were 1,513 unhoused people as compared to 1,714 in the same areas in LAHSA’s 2020 count – a 12% decrease in the overall number of unsheltered people.

“Speaking personally, I was surprised,” said Louis Abramson, a Hollywood 4WRD and Central Hollywood Neighborhood Council member who helped analyze the numbers. “That’s why we worked so hard to make sure the numbers and the analysis were correct.”

Abramson, who works as an astrophysicist for the Carnegie Institution for Science in Pasadena, said the findings are based on a statistical analysis that was double-checked for accuracy by researchers from USC and UCLA. He added that the numbers can be used to gauge the severity of homelessness as well as trends. For instance, the Hollywood 4WRD count found that the number of people living on the street fully exposed declined by 30% from the previous year, but the number of tents and temporary structures in Hollywood increased by 28%. The 12% overall decrease is based on the total number of people volunteers documented during the count, and the underlying figures help paint a clearer picture of how the dynamics of homeless are changing, Abramson said.

“Just because we have seen a 12% decrease doesn’t necessarily mean homelessness is getting better,” he added. “We saw a big decline in adults fully lying on the streets and fewer people lying on the sidewalks and in driveways and alleys, and that drives the 12% decrease. But it seems there has been a proliferation of tents and make-shift structures. There have been changes to the way people are living on the streets.”

Kerry Morrison, a co-founder of Hollywood 4WRD, said she participated in the February count and sensed at the time that the dynamics had changed. She came across fewer people in the four tracts she counted. Some tracts, however, like those around the Hollywood (101) Freeway, showed an increase in tents and encampments, she said.

Morrison said the decline in people sleeping outright on the streets shows that approaches to ending the crisis have been working – slowly. She cited Project Roomkey, in which unhoused people are placed in hotels and motels, as well as emergency shelters and bridge housing as starting to make a difference. Morrison also shared perspectives about why the tents and encampments have proliferated.

During the pandemic, the city and county’s approach has been and remains to not move homeless people from encampments due to risks of the potential spread of COVID-19, she said. The California Department of Transportation also suspended cleanups along freeway ramps and under bridges during the early part of the pandemic, she added.

“Under COVID, the CDC’s recommendation was not to disrupt people and move tents. And the tents tend to grow. It’s almost like little communities pop up. That’s not something we had seen before in Hollywood, but it’s one of the realities we’ve had,” Morrison said. “And despite the fact that we are down 12%, the situation people are facing on the street is more desperate than we have seen in the past.”

Los Angeles City Councilman Mitch O’Farrell, 13th District, said he is encouraged by the decrease in Hollywood, but much more needs to be done. He credited programs like Project Roomkey and A Bridge Home, and safe parking sites for people staying in vehicles, as being critical to keeping people off the streets. O’Farrell added that approximately 250 shelter beds that have been added in Hollywood during the past two and a half years are starting to show in the statistics.

“In Hollywood, we are united in identifying housing solutions for everyone and never giving up, and being relentless in pursuing that,” O’Farrell said. “We always have irons in the fire, so to speak, across the whole district, not just in Hollywood. We are always looking for additional solutions.”

O’Farrell credited Hollywood 4WRD for taking the lead in holding a local homeless count. He also cited organizations like the Center at Blessed Sacrament, Covenant House, Salvation Army, My Friends Place and Hollywood Presbyterian Church, where many tents are located around the perimeter, as partners in the effort to address homelessness. The councilman said Measure HHH, which is providing more than $1 billion in funding for permanent housing, is a long-term solution.

Garcetti’s promise of $1 billion in more funding to end homelessness is also promising, he said.

A day after the mayor committed to the new pending, a federal judge ordered the city of find housing for all people living on the streets of Skid Row by October as part of a lawsuit, which could have future implications on whether the city will be able to eventually remove encampments from sidewalks and other public property. A current injunction in the case prohibits the city from removing tents unless they are blocking public access.

“I think COVID-19 has been a giant magnifying glass. It magnified deficiencies in our social safety net. It magnified the visibility of homelessness in Los Angeles. It magnified the social and racial inequities that exist in American society, and I think homelessness is one of them,” O’Farrell said. “We have had a year-long reckoning. There has never been greater awareness of the need to address this in a very determinative, declarative and compassionate way, which has always been my process. Find a place for people to be safe at night, and when we do that, retake our public spaces.”

Abramson said that the Hollywood 4WRD count numbers will be used to help Hollywood-based social service providers plan for needs and create strategies for better serving people who remain unhoused. The organization, which is in the process of becoming a nonprofit, will continue to focus on local needs, he added.

“I think what we are seeing is some of the interventions that were taken are working in the way they were intended to,” Abramson said. “We have to build on them.”