Billboard a spectacular headache for neighbors 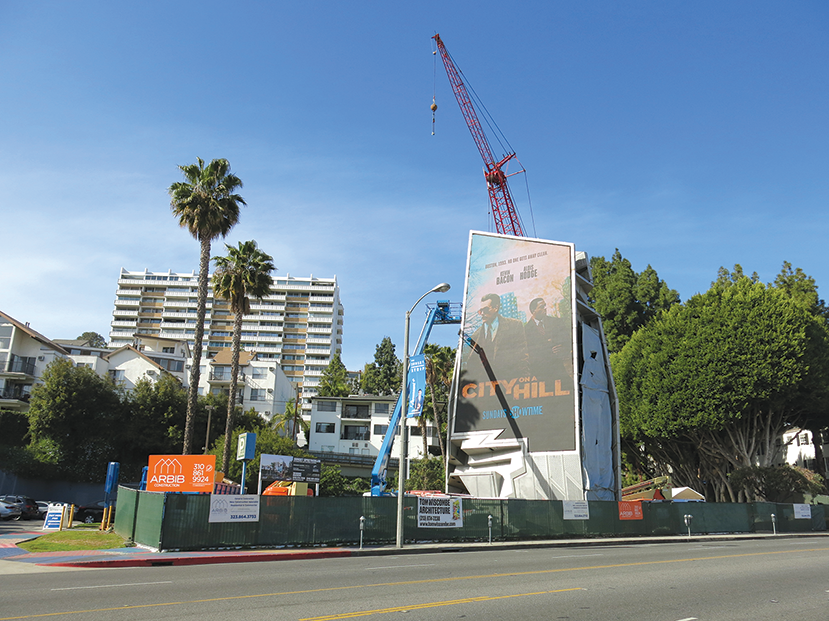 The Sunset Spectacular billboard lit up the Strip March 30. (photo by Cameron Kiszla)

The brightness of the Sunset Spectacular billboard in West Hollywood is drawing complaints from neighbors.

The digital billboard at 8775 Sunset Blvd., which is owned by Orange Barrel Media, began operating on March 30, and some in the area claim the billboard’s bright advertisements are impairing their quality of life.

Jerome Cleary, who lives a block and a half west of the billboard, said the billboard creates an “illumination” in his apartment, and he’s reached out to the city of West Hollywood to complain.

“The colors in my living room, it’s a giant slideshow, and I’m a block and a half away. Red and blue and yellow, constantly. That’s a real disruption to my life,” Cleary said.

“As part of its multi-year approval process, Orange Barrel Media worked with community members to establish brightness guidelines consistent with resident concerns and industry standards,” Collett said. “Orange Barrel’s agreement with the city to operate the Spectacular reflects brightness limitations that were borne out of that collaborative approach among the city, OBM and West Hollywood residents, including a broad range of operational requirements for each time of day.”

John Keho, director of planning and development services for West Hollywood, said the city “is aware of a complaint regarding light at the Sunset Spectacular.”

“There are objective light standards included in the agreement for the sign that the city can measure to ensure compliance. The city is currently investigating the issue,” he said.

Collett added that “beyond the initial complaint on March 30, OBM hasn’t received other complaints regarding brightness – outside of this request for comment from the Beverly Press – but OBM encourages residents to reach out directly and will engage with them to address and mitigate concerns.”

Elyse Eisenberg, who serves as chair of the West Hollywood Heights Neighborhood Association, said problems with the levels of light were predicted by many opponents of the project even before it was approved in 2018.

“[The Sunset Spectacular’s supporters] tried to say there was community support, but they didn’t interview anyone who lived north of Sunset, who were going to be most affected by it. They got signatures in support, but it was all people who lived south of Sunset who didn’t have a view of it,” Eisenberg said. 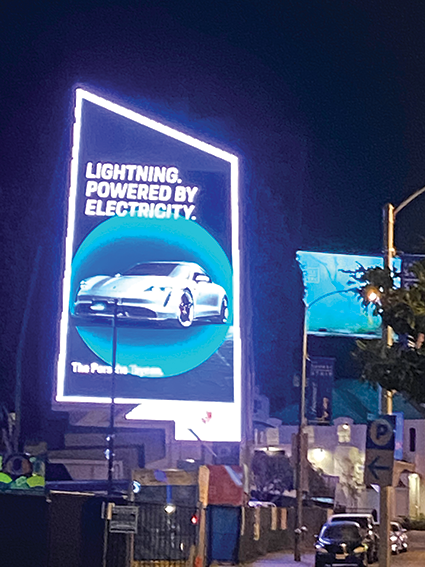 Susan Brant, property manager for a residential building near the Sunset Spectacular site, said residents tell her “the light shines and flashes through their blinds,” especially during a testing period when the device was first turned on, though the complaints have lessened somewhat since the light was toned down.

“It’s different when you don’t live here, of course, and I’ve been the manager here for 27 years, and I’ve never had any complaints [about the neighborhood before], but I’m getting them now,” she said.

Brant said she may lose a tenant who is “very unhappy” with the light coming into her unit, and she is afraid the Sunset Spectacular may impair her ability to rent units.

“It’s a joke,” Brant said. “Who’s going to want to live here? You think I’m going to be able to rent my apartments when people are looking out at digital signs?”

Some neighbors are concerned the problem will only get worse, as another billboard is planned for a site across the street from the Sunset Spectacular. On April 15, the West Hollywood Planning Commission will consider a “532-square-foot, double-sided, internally lit off-site sign” at 8752 Sunset Blvd. The meeting is scheduled to begin at 6:30 p.m. and will be held via teleconference.

“They want to put another one directly across the street,” Brant said. “I’m going to lose my tenants because they want it to look like New York, but this isn’t downtown New York. It’s a residential area … This isn’t Broadway.”

At least one former resident of the area near the Sunset Spectacular said digital billboards played a part in her decision to leave the city. Former West Hollywood resident Nicole Lux said she and her husband moved to West Los Angeles “due to the new developments and especially digital billboards.”

“Returning to my old WeHo neighborhood to visit, I’ve noticed the look and feel of the neighborhood is reminiscent of a cheap, gaudy Las Vegas,” she said. “What was once a nice enjoyable place to shop and eat outside is being overwhelmed by ugly needless distractions.”

“The Sunset Arts & Advertising Program is a great example of how the public and private sectors can work together to benefit the entire community,” Collett said. “The program is designed to reinforce the city’s legacy as a preeminent location for outdoor advertising, foster arts in the community and generate revenue for the city that can be applied towards social programs, all in a manner that takes into account residents’ quality of life.”