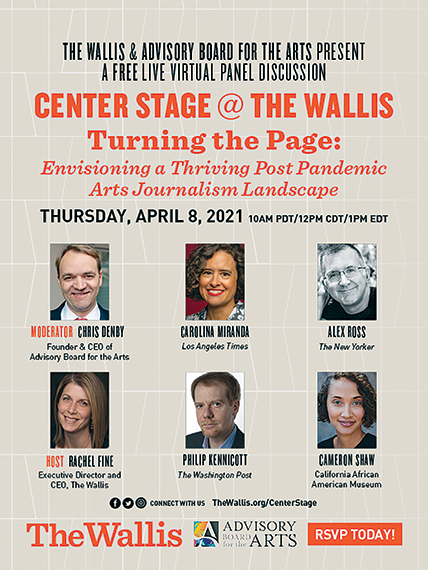 Journalists from the New Yorker, Washington Post and Los Angeles Times will participate in a panel discussion hosted by the Wallis on April 8. (photo courtesy of the Wallis)

The Wallis Annenberg Center for the Performing Arts and Advisory Board for the Arts present “Center Stage: Turning the Page, Envisioning a Thriving Post-Pandemic Arts Journalism Landscape,” a live virtual panel discussion featuring some of the country’s leading arts journalists, on Thursday, April 8, at 10 a.m.

The free 90-minute industry insider conversation and question-and-answer session, geared for the arts and culture community and moderated by Chris Denby, founder and CEO of Advisory Board for the Arts, will shed light on post-pandemic artistic resiliency and innovation from the unique perspective of arts and culture observers, critics and scholars.

Panelists include Philip Kennicott, a Pulitzer-Prize-winning senior art and architecture critic at the Washington Post and a regular contributor to Opera News and Gramophone; Carolina A. Miranda, a Los Angeles Times columnist covering art, architecture and urban design and regular contributor to KCRW’s “Press Play” who was named one of the most influential Latina journalists by CCNMA: Latino Journalists of California; Alex Ross, a music critic at the New Yorker since 1996 and an award-winning author; and Cameron Shaw, the newly appointed executive director of the California African American Museum and former freelance writer and editor for the New York Times and the Los Angeles Review of Books. Rachel Fine, Executive Director and CEO of The Wallis, will host the event.

“With live performances and in-person audiences curtailed during the global pandemic crisis, many arts organizations have shifted their focus during this time, embracing digital innovation as a way to stay connected to their constituents and provide vital support to the artists whose work typically graces their stages and galleries,” Fine said.

“This panel discussion will explore such topics as how the absence of traditional arts offerings has shifted the way arts journalists have covered the arts over the past year and what impact, if any, that may have on the future of arts journalism. The panelists will also share their insights on where the arts may be headed in the next six months to two years as we emerge from the pandemic and attempt to return to normalcy and come out stronger,” Denby added.

Center Stage @ The Wallis, founded in 2017 at the Wallis Annenberg Center for the Performing Arts, is a Los Angeles community-based panel discussion series established for discourse between arts leaders and scholars around timely culture topics ranging from equity to education and philanthropy. These events are open to the general public and free of charge to attend.

During the pandemic, The Wallis has partnered with various organizations to evolve this series from in-person breakfast gatherings to virtual broadcasts, allowing these conversation to extend far beyond geographic limitations.