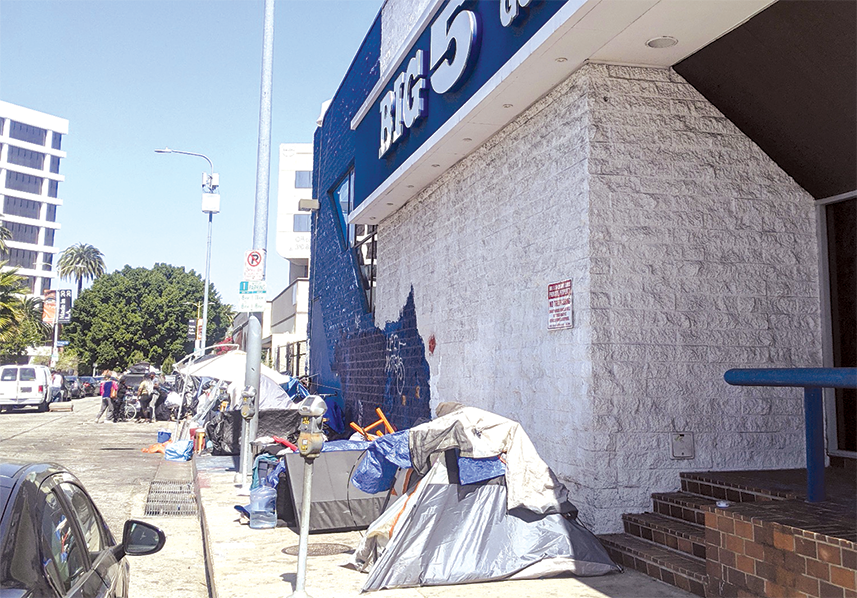 An encampment on Orange Street near San Vicente Boulevard has caused concerns about crime in Beverly Grove. (photo by Justin Sayers)

Police have increased patrols and have made crime reduction in Beverly Grove a high priority after a homicide on March 29 claimed the life of a 31-year-old resident of the 6600 block of Maryland Drive.

Los Angeles Police Department officials also confirmed that the suspect, Enoch Conners, 32, is believed to have stabbed the victim, Gabriel Donnay, while committing a burglary at Donnay’s residence. Conners, who police think was a transient, is believed to have fled the scene and entered another residence just north in the 6600 block of Fifth Street, where he stabbed himself and died. Police found his body during a search of the neighborhood after neighbors called police about the burglary and the victim was found.

Donnay’s death has sparked outrage in the community. Friends, family members and supporters gathered at Donnay’s residence on April 3 for a vigil in the victim’s honor. Some people in the neighborhood believe the suspect, who police think was staying in his car in the neighborhood, represents a larger threat posed by people who are unhoused in the area. An encampment on Orange Street near San Vicente and La Cienega boulevards has been the source of much frustration for residents, some of whom claim people in the encampment have committed other crimes in the surrounding neighborhood.

Capt. Shannon Paulson, commanding officer of the LAPD’s Wilshire Division, said police have not connected Conners to the encampment near San Vicente Boulevard but acknowledged the encampment exists and said it is being monitored daily by police. She confirmed officers had spoken to Conners two hours before the homicide after receiving an anonymous call on March 29 about a trespasser. To make an arrest, officers have to witness a crime or the reporting party must make a citizen’s arrest, she said. At the time, Connors did not appear to be a danger to himself or others, so there was nothing further officers could do, Paulson added.

“A radio call was generated for a possible trespass. Our officers responded and conducted an investigation. There was no request from any member of the public for a private person’s arrest, and the officers could find no other legal basis to further detain or arrest the individual,” Paulson said. “[Where he came from] has not been determined. He had a vehicle, but we are not sure where he had been staying or the length of the period he was in the neighborhood.”

In terms of the encampment, Paulson said some of the individuals staying there now may have moved from another area that was recently cleaned up when Metro reconfigured a nearby subway construction zone. She said the LAPD and other city agencies are working together to address the situation.

“[The encampment] is there and this has been on our radar. We have been trying to do whatever we can to address problems associated with that,” she added. “We have also been doing a lot of things in the neighborhood to make it safer. Our officers have been out there, and we are doing as much extra patrol as we can. We did a roll call out there to be highly visible. My partner, Capt. Mendoza, has been out there walking the neighborhood with officers and the personnel. We are making putting more officers out there a priority.”

Peter, the resident who expressed frustration about the encampment and crime, acknowledged that some progress has been made in addressing the situation, but it hasn’t been enough. He blamed public officials, including Councilman Paul Koretz, 5th District, for failing to properly address concerns.

“We need to hear from our elected officials that they hear the neighborhood’s concerns,” he added. “This is a problem all over the city.”

Koretz sent a letter on April 3 to people in the community expressing dismay about the homicide. Koretz’s public safety director and other staff members canvassed the community in the days after the murder in an attempt to allay fears.

“We are continually collaborating with all relevant agencies to bring safety and order into a shaken community that has been devastated by the tragic murder of an innocent neighbor, Gabriel Donnay, with a focus on very aggressively working to bring homeless residents of the nearby encampment into housing and off the sidewalk that they are blocking,” Koretz said in the letter.

“Last week our neighborhood experienced a horrific act of violence that took the life of a wonderful young man. Our hearts go out to the Donnay family, Gabe’s housemates and his friends on their devastating loss,” Feuer said in a statement. “It’s hard to move forward from something this painful, but we have to. That means acting to prevent crimes in the future. And it means doing much more about issues related to homelessness and mental illness. My office has reached out to homeless service providers and the council office to get folks living in the encampment on San Vicente into shelter as quickly as possible. While shelter space is very tight, we are hopeful that the people experiencing homelessness there will be housed soon. There is much more to be done on the broader issues of creating more housing and transforming our broken mental health system. I’m deeply committed to urgent action on these fronts.”

Koretz’s spokeswoman Alison Simard said the council office has been working for weeks to get people staying at the encampment on Orange Street into shelters, and four people have accepted housing. In addition to the LAPD, representatives from the Los Angeles Homeless Services Authority have been visiting the site regularly to work with people there who are unhoused. It is estimated there are currently 15 to 20 people staying at the site.

“There has definitely been an effort to provide services at that location. LAHSA has been out there for weeks and weeks and weeks, but these things sometimes take a lot of time,” she said. “We have been able to place some people into housing.”

Simard added that another issue is an abandoned building next to the encampment and near a sporting goods store that is open for business  near Wilshire and La Cienega boulevards. She said the council office has been working with the abandoned building’s owner and other city departments to expedite permits for demolishing the structure.

“The councilman has been doing a lot to make sure this problem is addressed,” Simard said. “He completely understands the community’s concerns.”