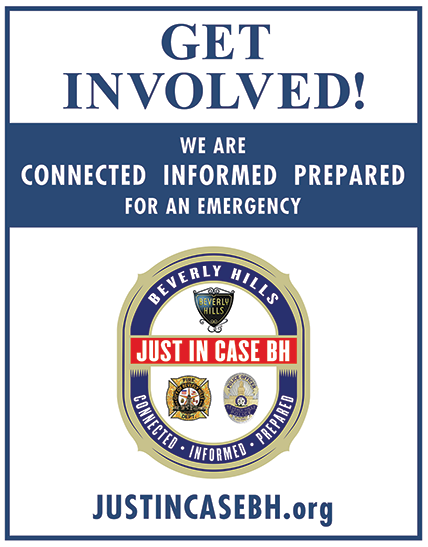 Members of the Beverly Hills Fire and Police departments, business community and neighborhood groups are continuing their efforts to better prepare themselves for emergencies as part of Just In Case BH.

The program was launched last year as a way to bring residents, businesses and city services leaders together to assist each other before, during and after an emergency through disaster preparedness, organizational leadership and communication, according to Beverly Hills Fire Chief Greg Barton.

“Right now, the city of Beverly Hills has outstanding fire and police departments, and they’ll provide the best service they can, but they’ll get overwhelmed in a major disaster,” he said. “What this program does is it brings the community together to basically help them help themselves to take care of their own neighborhood and their own areas, which is huge, because the fire department, the police department will be dealing with the large incidents, and we need the residents to really take care of the smaller areas that need help.”

Since starting work on the program back in May 2020, Just in Case BH organizers have been working to fill leadership positions in the program. Just In Case BH breaks the city into nine zones, which are represented by zone coordinators, neighborhood coordinators, and block captains.

Each zone has a neighborhood meeting place to report to in an emergency, where first aid and supplies can be provided.

Vera Markowitz, head of the advisory committee for the program, said they have filled many of those positions with “different people who do different things.”

The goal is to leverage the talent from the community – whether it’s engineers, doctors, search and rescue professionals – that can help in an emergency.

They are also working on creating a website that will serve as an informational hub, both before, during and after an emergency.

“People are excited about it. … It’s really very, very exciting for all of us,” Markowitz said. “We’re trying to cover all those bases. People feel more secure if they’re prepared.”

She said they are also still in the process of developing a manual to be delivered to every household in Beverly Hills about the program. That’s part of a push to make the program more sustainable, should some volunteers relinquish their posts due to age or other commitments.

The program will hit its official launch in the next couple months, and Barton said the next step will be to provide emergency preparedness training for volunteers. He said those skills, which include fire suppression and the ability to stop bleeding, are useful outside of the program.

He cited two examples of past trainees that were able to stop a fire and save the leg of a person who was a victim of a car collision.

“The training is great because it’s not only for the big disaster, but it’s also for day-to-day instances that happen,” he said.

Those who want to get involved can visit justincasebh.org.