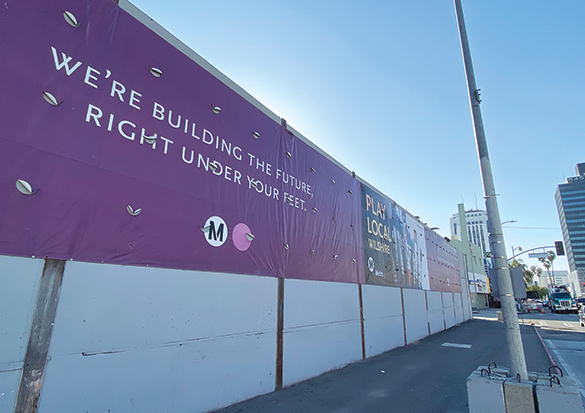 Crews are building underground passageways and rooms known as appendages at the future subway stations along the Purple Line Extension project. (photo by Edwin Folven)

Excavation and the construction of underground structures in and around subway stations will continue this week on the first two phases of the Purple Line Extension project.

Crews are still digging at the Wilshire/Rodeo station but nearing completion, expected later this month. Lane and sidewalk closures remain in place around the staging yards near Wilshire/Reeves. Work is occurring 24 hours underground. Ongoing geotechnical monitoring is also occurring around the project sites.

Farther east at Wilshire/La Cienega, construction on underground entrances and exits, passageways and utility rooms adjacent to the Wilshire/La Cienega subway station will continue through October 2022. To accommodate the work, a K-rail work zone will be located on the north side of Wilshire Boulevard between San Vicente Boulevard and a point mid-block between Gale and Hamilton drives. The work will include excavation, material delivery, hauling and construction. Wilshire Boulevard will be reduced to two lanes in each direction between San Vicente and La Cienega boulevards.

Similar work on underground rooms and passageways, also known as appendages, is occurring at the Wilshire/Fairfax and Wilshire/La Brea stations. Crews will be working on the streets around the future subway stations, requiring intermittent and permanent lane closures. Wilshire Boulevard will be reduced to two lanes in each direction between San Diego Way and Spaulding Avenue. Ogden Drive will be intermittently closed south of Wilshire Boulevard.

To accommodate construction near the Wilshire/La Brea station, Wilshire Boulevard will be reduced to two lanes in each direction between Detroit and June Streets through September. Hauling and deliveries to and from both La Brea Avenue yards will continue as tunneling progresses.

Near Wilshire/Western, tunneling support continues. Intermittent single-lane closures will be necessary on Wilshire Boulevard between Western Avenue and Manhattan Place.