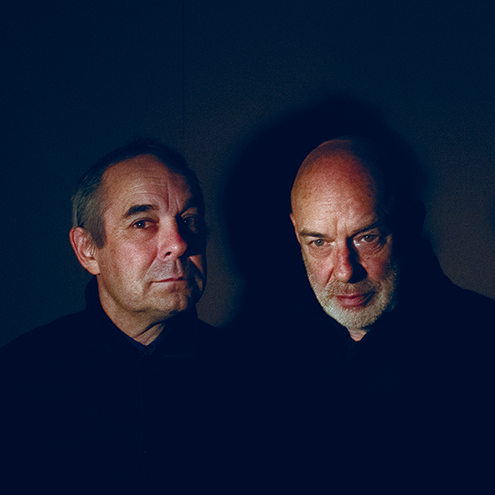 Ambient artists Brian and Roger Eno’s EP “Luminous” served as the soundtrack for the music competition. (photo courtesy of The Music Center)

The Music Center and nonprofit radio station dublab announced the 71 “Best Films” and “Official Selections” awardees of A Quiet Scene: L.A., a free film competition and screening initiative that was launched in January.

Over a five-week period, the public was invited to submit a short original film that is an authentic reflection of Los Angeles during current times, scored to one of the seven tracks featured on the “Luminous” EP composed by pioneering ambient music artists and brothers Roger and Brian Eno; the album was released by Deutsche Grammophon as a follow-up to “Mixing Colours,” their lauded debut album as a duo.

The top selected films will be shown publicly on the large LED screens on Jerry Moss Plaza in an immersive sound environment at the Music Center until April 18. In addition to the outdoor exhibition, the films will also be featured for viewing on the Music Center Offstage, the performing arts center’s virtual platform.

To increase engagement and access to this community project, the public is invited once again to participate in A Quiet Scene: L.A. by voting on a fan favorite film until April 11, by viewing the gallery of “Best” and “Official” selections on the Music Center Offstage. Fans will be able to select their top film, per music track featured on the Luminous EP. The public’s selected films will be recognized as a fan favorite in the viewing gallery.

“We had hoped that A Quiet Scene: L.A. would serve as a record of time and expression, and the film submissions captured that essence. We learned through the eyes of participants that Los Angeles is more than a place or landmark but a sense of home, belonging, connection and community,” said Rachel S. Moore, president and CEO of the Music Center. “All who contributed their films to this program inspired us with their vision and their trust to share their stories with the public. We hope Angelenos will once again join us and vote for their favorite film to continue this conversation of who we are and what we represent as one people.”