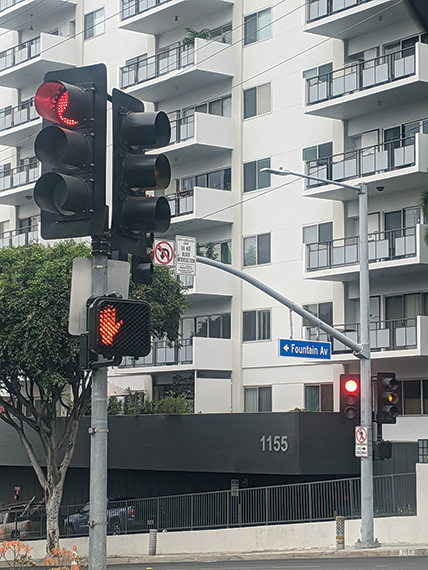 The West Hollywood City Council approved a plan to put a bike lane on Fountain Avenue. (photo by Justin Sayers)

The West Hollywood City Council unanimously voted during the March 1 meeting to come up with a plan to put protected bike lanes on Fountain Avenue and Santa Monica Boulevard.

The item directs staff to conduct a feasibility study to analyze how the city could install the lanes, while also amending the city’s bicycle and mobility plan, which was passed in 2017, to include the bike lanes as future projects. No timeframe was given for when those recommendations will be brought back to council, and when the lanes will be installed.

“Protected bike lanes will bring us into the light and into a space where we can say we are a progressive city once again,” Councilwoman Sepi Shyne said.

The study, which will cost $100,000, will include determining where and how bike lanes can be installed and what types of bike lanes can be implemented – such as raised lanes or lanes separated from traffic with vehicle barriers. There is no cost projection for the project, but staff estimated that longer-term capital costs could exceed $10 million.

Staff cautioned that the installation of bike lanes may require reductions in street parking, changes to medians, potential lane adjustments and changes to sidewalk widths.

Councilwoman Lauren Meister expressed concern over the potential loss of parking, especially along Fountain Avenue, which has a lot of homes.

“If we do have to lose spaces, we have to think about where we’re going to find them for those residents,” she said.

She added that the Santa Monica Boulevard project is a priority because it’s the direct route from the city to downtown Los Angeles and Santa Monica.

“It’s an important place for us to have a bike path,” she said.

The item, which was introduced by Mayor Lindsey Horvath and Councilman John Erickson, was met with overwhelming support from the public during the public comment period.

In an interview, Karen O’Keefe, a member of the West Hollywood Bicycle Coalition, said she was “delighted.”

“It was the biggest step forward we’ve seen in West Hollywood ever for safe infrastructure for bicyclists. It’s a huge step forward toward greener transportation,” she said.

O’Keefe said that West Hollywood is not the safest city for bicyclists, adding that she’s personally faced aggression from drivers while knowing several people who have been injured by cars or run off the road.

“Of all the places I’ve lived, the climate is the best for biking. It’s a health-conscious, climate-conscious city, but it stands in contrast with values of the city and state that we prioritize automobile transportation to the detriment of everything else,” O’Keefe said.

She said that the coronavirus pandemic is likely to blame for a shift in transportation trends, as less people have relied on cars and are shifting to bicycle transportation.

“Maybe we’re kind of experiencing a shift like we had with cigarettes, where something went from totally acceptable to where we try to reduce the harm,” she said.

The vote was looped in with an update on the city’s pedestrian and bicycle plan.

Bob Cheung, the city’s senior planner, said that the plan includes 72 projects, such as improvements at unsignalized crosswalks, signalized intersections and bicycle improvements throughout the city. Of those 72 projects, the city has completed 14, is underway on 33 and has 25 planned for the future.

I’m hoping the city moved forward with these bike lanes. It’s very dangerous to ride a bike in LA which makes no sense since we’re a progressive, health-centric city!

Protected bike lanes on Santa Monica Boulevard would be an absolute game changer! (Along with Bus Only Lanes but that’s a whole other whale)