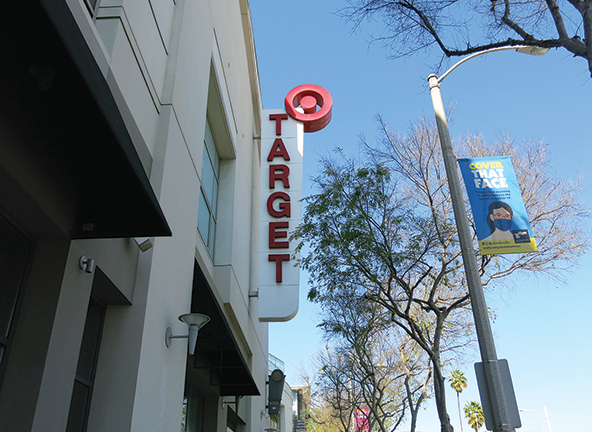 The West Hollywood locations of stores such as Target and CVS will have to pay their employees an additional $5 per hour in hazard pay, but not until mid-April. (photo by Cameron Kiszla)

West Hollywood expanded the businesses that fall under its hazard pay regulations on March 1, but workers at those businesses will have to wait until mid-April for their pay to increase.

The council attempted to pass an urgency ordinance including those businesses, which would have taken effect immediately, but the votes against the measure by Councilman John D’Amico and Mayor Pro Tempore Lauren Meister prevented the council from reaching the necessary four-fifths margin for an urgency ordinance. A majority was reached, however, allowing the ordinance to take effect 45 days after the March 1 vote, and it will remain in place for 120 days, until mid-August.

D’Amico and Meister said they wanted the city to do more to push the newly included stores – pharmacies like CVS and Rite Aid and stores such as Target that sell groceries, but do not meet the city’s definition of a grocery store, which sells food products as 70% or more of its business – to help their employees get vaccinated, and they voted against the ordinance because it did not include that stipulation.

Meister proposed that the payment period for the additional $5 per hour be shortened from 120 days to 60 days as an incentive for these businesses to push their employees to receive a vaccine.

“Our endgame is to get people vaccinated. Basically, the workers and our residents are not safe until people are vaccinated, regardless of the hazard pay,” Meister said.

D’Amico referenced the decision made two weeks ago to provide hazard pay to grocery store workers when explaining his decision.

“I am very much in support and want to find a way to pay the workers that were not included in the urgency ordinance that we passed two weeks ago. It’s really important,” D’Amico said. “But it is equally important that we provide as much thoughtful consideration about every single possible thing we can do to get people vaccinated.”

The other council members expressed concern about the plan, which Mayor Lindsey Horvath noted might “potentially backfire” if the hazard pay is tied to vaccinations. “You can’t force people to get a vaccine,” Horvath said, and some employees could delay their vaccinations so they would continue receiving the higher pay.

“I think that this will disincentivize people to get vaccines, and I don’t feel good about that. That’s concerning that we’re sending a message that we’ll pay you more if you wait to get a vaccine,” Horvath said.

Councilman John Erickson pointed out that though other cities have enacted hazard pay for frontline workers, “no other city has done this, and there’s probably a reason for that.”

“I think it’s very dangerous to set up hazard pay based on vaccinations,” Erickson said.

Councilwoman Sepi Shyne added that she struggled to find a way to adequately measure if employers were doing enough to vaccinate their workers.

“If this were to happen and this comes back in 60 days, what metrics are we looking at and how do we quantify that?” Shyne said.

Despite Meister’s proposal to use vaccination records, the number of cases in the city and reports from the county about outbreaks in West Hollywood to determine if enough progress was being made, the three council members were not swayed.

The three majority council members also expressed some unease with tying the hazard pay to someone’s vaccination status, as many of the grocery store workers are Black, Indigenous or people of color, who have been disproportionately impacted by the pandemic.

“To me, the hazard pay isn’t leverage to get people to get the vaccine,” Horvath said. “The hazard pay is a recognition for the work that’s being done on the front lines, and quite frankly, has been done since the beginning of this pandemic by people who are not at the top, but people who are often working multiple jobs just to make ends meet. … I am willing to try [pushing for employers to help their workers get vaccinated], but not at the risk of rewarding people who have sacrificed so much already and are still putting themselves in harm’s way, whether or not they have a vaccine in their arm.”

Instead, the council will request that pharmacies, retail stores and grocery stores coordinate with each other to make vaccinations easier for their employees to get. Grocery store workers became eligible for vaccinations on March 1.

Because the urgency ordinance did not pass, the credit given to businesses such as Trader Joe’s that already have some amount of hazard pay enacted will be delayed as well. Until April 16, those businesses will have to pay an additional $5 per hour on top of the hazard pay, which Shyne noted last month was already an additional $4 per hour for Trader Joe’s employees.

The council also decided against including Best Buy in the ordinance, something D’Amico requested last month but was not feasible under West Hollywood’s ordinance, which was based on that of the city of Los Angeles.