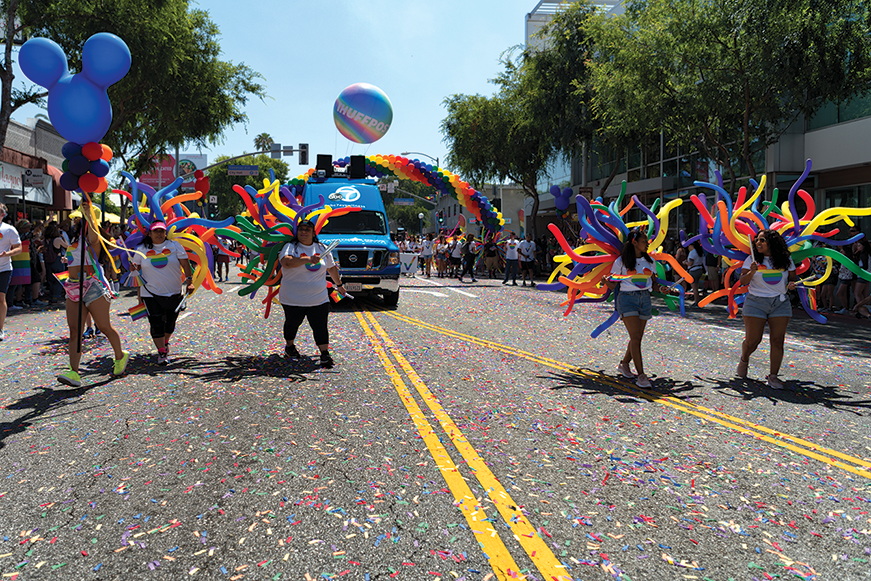 Large public celebrations of Pride haven’t been held in West Hollywood since 2019, when they were put on by Christopher Street West. (photo by Jon Viscott/courtesy of the city of West Hollywood)

This year’s Pride month celebrations in West Hollywood are likely to be held mostly virtually.

Instead, they expressed support for a potential four-weekend celebration where businesses – at least, the ones legally allowed to operate in accordance with COVID-19 public safety regulations – could host their own events, similar to the dineL.A. program for local restaurants. They also favored a virtual concert or program to mark Pride.

“For me, this year, it’s a hard ‘no’ on any in-person events … I feel that if we promote anything in person, the crowds are going to come. Even if it’s four weekends, it could disperse the crowd or it could just make everyone so excited to come to West Hollywood because they’ve been stuck in their homes … We’re going to have crowds and crowds, and then we’ll be a hot spot, an outbreak situation. So for me, having a digital program component is really what I want to focus on,” Shyne said.

City staff members added that the state is not likely to allow large public gatherings, despite the county’s recent progression from the Purple Tier to the Red and Orange tiers. Kristin Cook, the city’s public safety director, said it’s unlikely a street party will be allowed by June, as the Orange and Yellow tiers don’t allow it, and “I can’t imagine they’re going to take us out of yellow by June.”

Instead, the council members proposed that the city could focus on a digital presence this year and allow the businesses to host their own celebrations, though those smaller celebrations could be connected through citywide branding.

“It would be up to the business how they want to leverage Pride for their business,” said Genevieve Morrill, president and CEO of the West Hollywood Chamber of Commerce, which the council appointed in December to help city staff and commissions develop a plan for Pride. 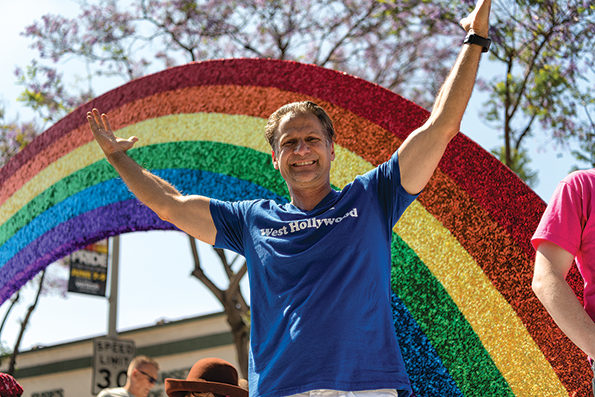 Councilman John D’Amico, shown during the 2019 Pride celebration, serves on the City Council’s Pride Subcommittee. (photo by Jon Viscott/courtesy of the city of West Hollywood)

Abby Borden, director of event and design for consulting firm JJLA, which is assisting the chamber with the plan for Pride, said they’re planning a “press blitz” on May 22, which is Harvey Milk Day, with information for the public and businesses that want to participate.

The council members suggested the digital program should be something relatively short. The chamber suggested three potential plans for Pride that would produce between 20 and 80 hours of virtual content. Instead, Shyne suggested something like “an hour’s worth of programming,” because “I think we’re all truly just sick of watching things online.”

“I think the digital opportunity is worthwhile, because we can push that out, but I am just not sure that curating 20 hours or more is a good use of our efforts,” D’Amico said.

It’s also important to consider what Christopher Street West, which announced last year that it would no longer host LA Pride in West Hollywood, is planning for Pride this year, Shyne said. She added that CSW’s virtual event is planned for June 11-13, and West Hollywood does not want to offer a conflicting event, as people might want to attend both.

“I would want to make sure we’re not competing with any kind of digital event that we do … and to also differentiate ourselves, because this is really the birth of WeHo Pride in its digital form,” Shyne said.

Shyne also proposed that the budget suggested by the chamber, which ranged from $185,000 to $325,000, was too much, and she asked that it be pared down before it comes back before the full council on April 19.

“For me, it’s going to be really important to scale this budget down a lot, because this is not in our budget at all, given the economic downturn,” Shyne said.

The Pride Subcommittee will likely reconvene after this year’s Pride month to begin to “discuss how to move forward with planning for 2022,” D’Amico said.

“I think we’ll have a lot of lessons learned,” D’Amico added.