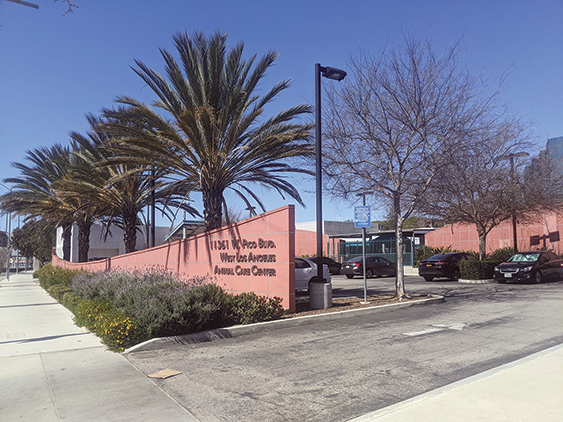 The West Los Angeles Animal Shelter, located about seven miles away from West Hollywood, would be used to store lost and found animals as opposed to a shelter in Carson, about 26 miles away. (photo by Justin Sayers)

The West Hollywood City Council recently took the first steps toward moving their animal care and control services to the city of Los Angeles and away from Los Angeles County, which has handled the task since the city’s inception.

The council members expressed support for the change during the March 15 meeting, unanimously passing a motion to initiate discussions with the city of L.A. to see if projected costs of a new contract, which are estimated to be approximately $60,000 higher annually due to administrative costs, could be reduced.

But the council members said that despite the cost, moving under Los Angeles Animal Services would better serve the community, citing the location of the county’s shelter in Carson, complaints from West Hollywood residents about the current services and the desire to move in a new direction regarding animal control.

“The city of L.A. can do a better job than the county and it would be more convenient for our residents,” Councilwoman Lauren Meister said. “While I understand financially at this moment we might not want to change our contracts, what I would love to see is a commitment from our council that we do want to pursue a relationship with the city of Los Angeles and do what we can to bring down those costs and then have a discussion that we can move forward with this when we want to do so.”

Councilwoman Sepi Shyne said she adopted her dog from the Carson shelter, which is located approximately 26 miles away from West Hollywood, and that her rescue pet was traumatized by other dogs barking.

“Carson shelter is known as a high-kill shelter. It’s a scary place for animals. It is very, very far,” she said. “The fact that it is so far away and our residents may have no choice but to have their lost pet there and not be able to reach that pet there. … We’ve got to move in this new direction.”

Councilman John Erickson said he’s heard from many residents who have experienced issues with the county’s animal control services, saying he’s not comfortable with contracting with the county again. He also said there is limited accountability on whether a pet from West Hollywood that ends up at the shelter receives vet care or may be killed.

He added that he hopes this is the start of West Hollywood discussing whether to eventually create their own facility.

“I actually think it is another opportunity for us to develop a real no-kill facility in SoCal,” he said.

West Hollywood has long considered shifting its services away from the county, according to a staff memo. They last renewed the contract with the county in 2019, and extended it through June 2024 with the caveat that staff would return later with an analysis of other potential options.

That analysis found that staff has no way to track the response times by county animal control officers and no guaranteed level of service built into the contract. Additionally the county has been open about how hard it is to service West Hollywood because of the location, while also hearing complaints from residents regarding response times.

West Hollywood is currently serviced by three facilities for lost and found animals – the private Amanda Foundation in Beverly Hills, as well as the SPCLA facility in Hawthorne (15 miles away) and county shelter in Carson. If full, the Amanda Foundation takes them to Hawthorne. The contract with the city of L.A. would shelter animals in the full-service West Los Angeles facility, which is only seven miles away.

Meister said she’d also like the city to consider working with West Hollywood veterinarians for housing lost and found animals.

“Perhaps we can think about establishing some relationships with the veterinarians in our city to see if there is any interest in helping in this way,” Meister said. “Usually they go to the vet anyway to see if they’re chipped.”

A cost analysis found that the city of L.A. could provide the same services – animal housing, field services, animal shelter intake, etc. – at a lesser amount than L.A. County. But the overall cost would be more than $60,000 higher because of a nearly $70,000 estimate for overhead services.

In the motion, councilmembers directed staff to see if they could reduce those costs based on economies of scale considering that the city of L.A. already contracts with the city of Beverly Hills to provide animal control.

“I just can’t even imagine that we could cost that much,” Meister said.

Danny Rivas, the city’s code compliance manager, cautioned that the city should not fully commit to the new animal care contract amid the pandemic, which has strained cities financially. But he said the current contract leaves the city the ability to break services with the county before the contract’s end.

Rivas said that staff previously met with representatives from the city of L.A. and got the sense that they were not open to negotiate a lower cost estimate, but that those discussions did not formally involve a negotiation.

He was asked by staff whether the city and the county were the only two potential options for animal care services, saying that previous research found that very few private organizations are willing to take on the services.

“That more or less is going to be your two,” Rivas said.