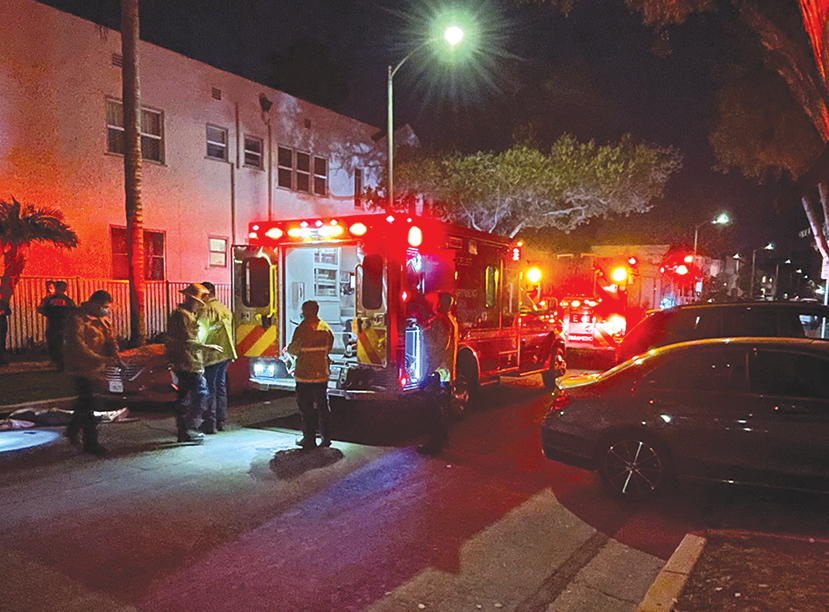 Arrests have been made in an alleged murder and robbery last week. (photo courtesy of Peter Nichols)

Police have arrested two men for allegedly murdering a male victim on Feb. 26 in a residential neighborhood south of the Melrose Avenue shopping district.

Police said they linked the two suspects, who allegedly knew the victim, to the crime through undisclosed evidence and worked with the FBI’s Fugitive Task Force to locate and arrest them. The suspects were identified as Robert Aikens, 22, of Stone Mountain, Georgia, and Shidreyius McClinton, 20, a resident of Atlanta. The body of the victim, Nazeer Ejua Defares, 24, of Decatur, Georgia, was found by citizens at approximately 6:40 p.m. near the corner of Gardner Street and Rosewood Avenue. Capt. Shannon Paulson, of the LAPD’s Wilshire Division, attended a virtual neighborhood crime meeting on March 2 held by the Melrose Action Neighborhood Watch and provided details about recent homicides in the community. In the murder last Friday, authorities believe the suspects allegedly shot the victim during a robbery inside a moving vehicle and pushed his body out of the car. The victim was an “up and coming rapper from Georgia” and the two suspects were also involved with the rap music business, Paulson said. A dispute over money allegedly occurred inside the vehicle. She did not know why they were in the Melrose area.

The Los Angeles County District Attorney’s Office filed murder charges against Aikens and McClinton on March 2 and they remain in custody.

Another murder during a car-to-car shooting occurred on Jan. 12 near Melrose and Sierra Bonita avenues. Robert Antrel Love, 27, was arrested later the same day in West Hollywood and is facing a murder charge. A dispute occurred between occupants of the two vehicles prior to the shooting, Paulson said. A 21-year-old passenger in one of the vehicles was struck by gunfire and later died at the hospital. Paulson said the suspect was from out of state and had recently rented an apartment in West Hollywood. That incident is not believed to be gang-related, she added.

An earlier homicide occurred on Dec. 15 near Melrose and Stanley avenues. Police recently announced the arrest of Santana Stamps, 19, of Los Angeles, who is facing a murder charge and is next expected to appear in court on March 11. Paulson said that murder involved two men in their 20s who were shopping in the area and were confronted by a gunman who allegedly tried to rob them. One of the victims, who was from Ohio, was also armed and exchanged shots with the suspect, Paulson said. One man died at the scene and the other was hospitalized. The suspect was allegedly later involved in a gang-related shooting in South Los Angeles and was linked to the Melrose murder after being arrested for that crime.

“I know the greatest concerns obviously … are the homicides we’ve seen and the robberies we’ve seen. The good news is, in regards to the homicides, every one of them has been solved and every one of them involves suspects who are in custody,” Paulson said. “There is no connection between each of these crimes, definitively. There’s no commonality between these, no relationship, other than they all involved young men in their 20s. There does seem to be a frequency of individuals from out of state, but that could just be the effect of the [attraction] of the Melrose-Hollywood area.”

Paulson also acknowledged there has been an increase in street robberies in the Melrose area since the beginning of the year. Much of the increase is being attributed to people being targeted who are wearing expensive jewelry. At least seven recent robberies in the area, as well as two on Third Street near La Cienega Boulevard, have involved the theft of Rolex watches. Paulson said more resources are being deployed to the area, including vehicle and bike patrols, foot beats and the LAPD’s Mounted Unit, as well as undercover operations.

“Our request to everyone is to be very careful,” Paulson said. “We do have leads on these robbery cases and we are diligently following up on these robberies. There has been somewhat of a drop-off in those robbery cases in the past week or so. We will, to the best of our ability, continue to put resources in that area, a high-visibility patrol posture, to try to prevent this pattern.”

Peter Nichols, cofounder of the Melrose Action Neighborhood Watch, said the murder last Friday heightened concerns about crime among local residents, but he is relieved it has been solved. Nichols, who lives nearby, went to the scene of the murder shortly after he was alerted by neighbors that a body had been found.

“I was there within 10 minutes. Paramedics had just gotten there,” Nichols said. “What’s distressing about it is it’s part of a larger increase in crime in the area.”

He added that while the news about the arrests is positive, more needs to be done overall about rising crime.

“All of the murders have been solved, and that’s great. It seems like they have wrapped everything up,” Nichols said. “But these crimes are not isolated to our area. It’s not comforting, but definitely understandable, because this is going on all over the city.”

Los Angeles City Councilman Paul Koretz, 5th District, added that he plans to continue urging law enforcement to do everything possible to prevent crime in the area.

“I am working closely with the Los Angeles Police Department and relevant agencies to make sure all necessary resources are being brought to bear to prevent and thwart criminal activity in the Melrose area,” Koretz said. “There are multiple action plans that are currently being put into place at this time, which we strongly believe will result in positive solutions in the Melrose corridor. On a daily basis, my team coordinates and collaborates with LAPD command to assure that the necessary deployments, including patrols and foot beats, are present in the region. The security of our business and residential communities is my highest priority. We are fully committed and all in to restore safety on and around Melrose.”