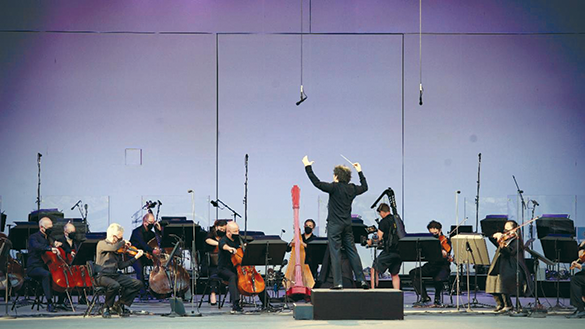 The L.A. Philharmonic’s second season of Sound/Stage will begin Friday, March 5 and run until June 25. (photo courtesy of the Los Angeles Philharmonic)

The Los Angeles Philharmonic announced that its second season of Sound/Stage, which begins Friday and runs through June 25, will include performances by the orchestra, Grammy Award-winning artist Common and Grammy Award-gospel duo Mary Mary.

The orchestra’s music and artistic Gustavo Dudamel acts as host for the free online series, which also includes new performances by the LA Phil, as well as conversations with LA Phil Creative Chair John Adams and renowned chef José Andrés. Each episode includes one or more special segments, ranging from animated shorts to interviews between Dudamel and his guests. Everything will be available at laphil.com/soundstage.

“It has been a joy to watch Sound/Stage grow and blossom and to share it with audiences here in Los Angeles and around the world. In this second season, we explore everything from the connections between music and food to the early history of the Hollywood Bowl, and I get to share the stage with dear friends like José Andrés and John Adams. And I cannot describe how proud I am to welcome my son, Martín, for his LA Phil debut. Until we can all make music together again, we hope that, by sharing these moments of beauty and happiness, we can be together in spirit,” Dudamel said.

“In its first season Sound/Stage began as a response to the global pandemic and the turbulence of our socio-political moment. We needed to find a way to continue connecting with audiences and offer a space to reflect on our collective experiences through music. Thanks to the support of our generous donors and the adventurous spirit of our orchestra, we were able to do that through Sound/Stage and other media initiatives. Now as we enter season two, we are continuing to explore the medium and bring Gustavo’s ideas about music and the world to the fore. Sound/Stage opens up new pathways for connection and communication that we will continue to build on long after the pandemic ends,” Chief Executive Officer and David C. Bohnett Chief Executive Officer Chair Chad Smith said.

The second season of Sound/Stage is supported in part by the National Endowment for the Arts.

For information or to watch, visit laphil.com/soundstage.