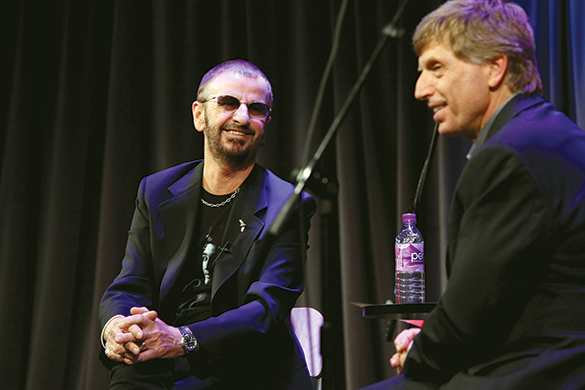 The Grammy Museum announced a new program centered around Ringo Starr that features a virtual exhibit of the record-setting “Ringo: Peace and Love,” along with new and archival interviews that are part of the museum’s streaming service, Collection:Live.

The career-spanning program features the interviews, conducted with Bob Santelli, founding executive director of the museum, as well as a virtual version of the groundbreaking 2013 exhibit, “Peace & Love.” The exhibit was both the first major exhibit ever dedicated to a drummer and the first to explore the career of the Grammy Award-winning Starr.

The scope of the exhibit spans Ringo’s life, starting with his early life growing up in Liverpool, to Raving Texans turned Rory Storm, to the Beatles, to becoming a solo artist and then to the All Starrs, with whom he continues to tour. He just celebrated 30 years with the All Starrs, marked by the publication of the stunning book, “Ringo Rocks: 30 years of the All Starrs.” The virtual exhibit will include images from the unique collection that included diverse artifacts, rare and never before seen photographs, documents and personal letters.

The museum’s Public Programs digital series features new intimate sit-down interviews with artists and musicians recorded via digital conferencing. Since the museum opened 12 years ago, it has offered more than 1,000 public programs. The museum is also releasing a new exhibit with several photo slideshows.

Collection:live is the Grammy Museum’s new official online streaming service available for $2.99/month or $29.99 a year. Proceeds benefit the museum’s music education initiatives and help keep the museum’s mission alive while the physical location remains closed due to COVID-19.