Protest in Hollywood ends with violence and arrests 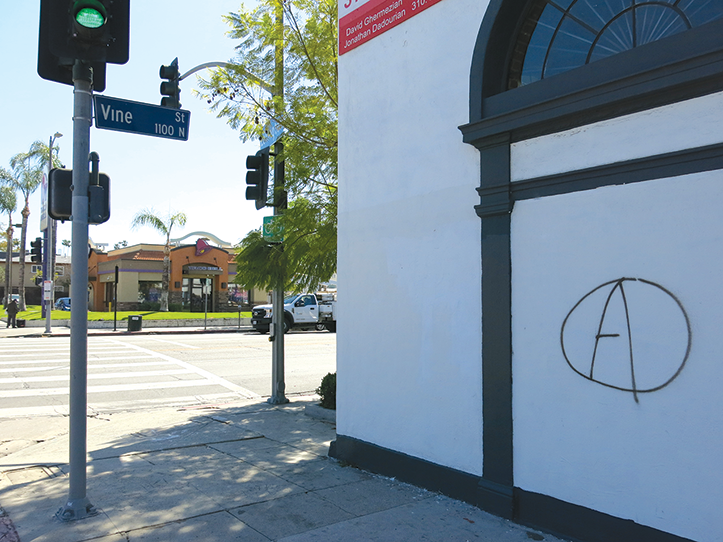 Demonstrators clashed with police near the corner of Lexington Avenue and Vine Street. (photo by Cameron Kiszla)

Ten people were arrested after a clash between dozens of protesters and Los Angeles Police Department officers in Hollywood on March 13 on the one-year anniversary of the death of Breonna Taylor at the hands of police in Kentucky. Three officers and one protester were injured.

The demonstration began around 8 p.m. and started peacefully. Demonstrators marched on Santa Monica and Sunset Boulevards, as well as Vine Street. Police said a group dressed in all black clothing began spray painting graffiti, breaking windows and lighting trash can fires. Social media posts show a tense standoff between police and demonstrators near Lexington and Vine Street. Many of the demonstrators wore helmets, tactical vests and gas masks, and carried sticks, batons and shields. Authorities said members of the group were also armed with pepper spray and smoke grenades. A post on social media shows a man jumping on the hood of an LAPD patrol car as the officer attempts to drive away.

During the standoff, one officer was struck by a computer allegedly thrown by a demonstrator and suffered a hand laceration. Another officer sustained ear damage when a smoke grenade detonated and another suffered a knee injury in a fall during a foot pursuit, police said. The protester who was injured was treated at the scene and taken into custody for assault with a deadly weapon on a police officer.

The suspects arrested were identified as Jessica Woodward, 27; Christopher Stefanic, 36; John Brown, 19; Avery Anglin, 22; Eric Smith, 24; Mario Rappa, 27; Erik Gersovitz, 30; Brian Lightfoot, 24; and Benson Williams, 27. A 17-year-old juvenile was also arrested but was not identified. The charges include assault with a deadly weapon on a police officer, unlawful assembly and possession of a prohibited item.

BHUSD looks ahead to school reopenings