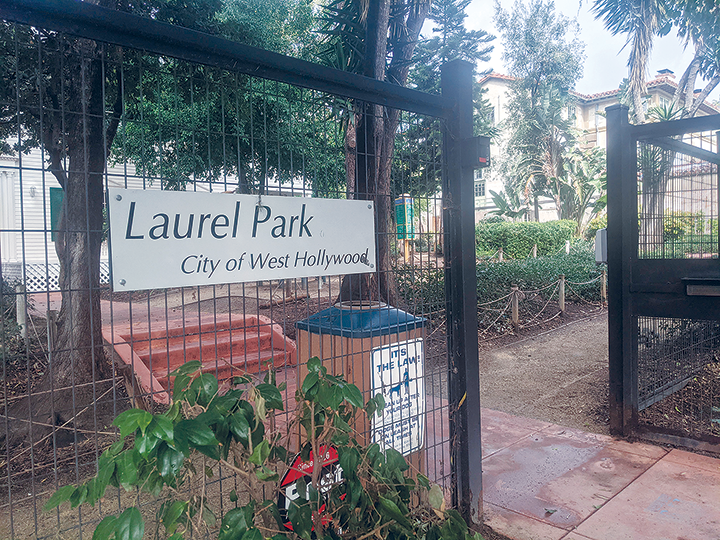 Laurel Park was suggested as a potential space for a West Hollywood memorial for LGBTQ+ suicide victims due to its quiet, meditative location. (photo by Justin Sayers)

The West Hollywood City Council tentatively approved the installation of a memorial commemorating lives lost to suicide in the LGBTQ+ community, with hopes to finalize the memorial and open it in September, which is Suicide Prevention Awareness Month.

The memorial, which was brought forth in a motion by Mayor Lindsey Horvath and Councilman John Erickson, would serve as a tribute to LGBTQ+ people, who are at a disproportionate risk for suicide, according to city staff.

In a memo explaining the proposal, city staff pointed to a 2015 study that showed that LGBTQ+ people are four times more likely to attempt suicide than heterosexual people, while 43% of members of the transgender community, specifically, have attempted suicide in their lifetime. Additionally, those numbers are higher for LGTBQ+ youth.

“Our hope was to have it in September because there is a national recognition day – that could be the date for installation,” Horvath said, referring to Sept. 10, which is designated as World Suicide Prevention Day.

While the item was passed unanimously by the council during the March 1 meeting, some council members expressed concern that the memorial could influence people to attempt suicide.

Councilman John D’Amico, who noted that he personally knows five members of the LGTBQ+ community who have died by suicide, requested that the council also reach out to the public and mental health professionals to provide input about any potential issues before a final approval.

“A memorial is usually to the dead from events that have passed, not to an ongoing crisis in which self-harm is the cause and that’s what kind of troubling me a little bit,” he said. “It’s not a memorial to have to not yet tried or completed suicide and if we install it, that’s kind of what it becomes – a memorial to future suicide completions.”

The motion additionally directs staff to gather feedback from the city’s Public Facilities Commission, Lesbian and Gay Advisory Board and the Transgender Advisory Board for appropriate design and location for the memorial.

He asked the council to obtain written support from the outside organizations for the memorial before final approval.

“I want to make sure we have some engagement from our social service agencies that provide these services – mental health and suicide prevention,” D’Amico said.

Councilwoman Sepi Shyne suggested adding the National Suicide Prevention Lifeline number, as well as the number for the TrevorLifeline, an initiative of the Trevor Project, a West Hollywood-based organization that provides crisis intervention for LGBTQ+ youth.

“I think it will be helpful to get that information to anyone who may be there that may need that info because they do save lives,” Shyne said.

Councilwoman Lauren Meister was supportive of the suggestions.

The council’s vote approved the use of $7,500 from funds in the city’s special council programs account for the purchase and installation of the memorial.