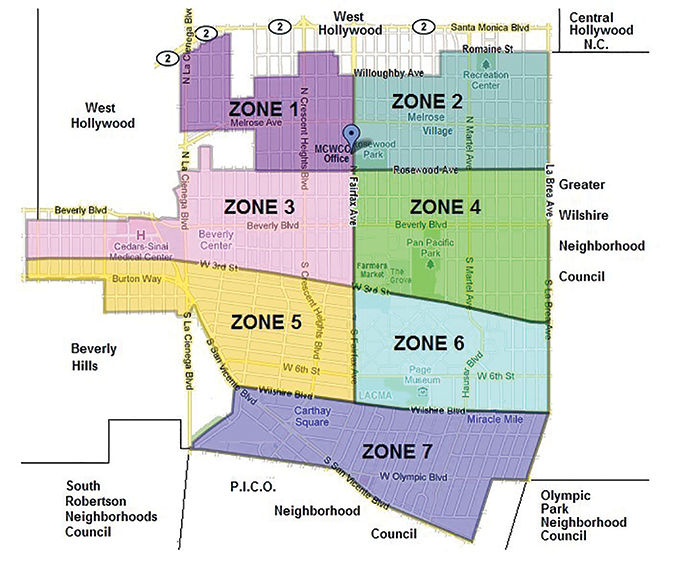 The Los Angeles City Clerk’s Office released results for the first batch of elections of the Los Angeles Neighborhood Councils, including the Mid City West Community Council, on Tuesday, March 23.

Those totals showed that 32 of the 35 seats on the Mid City West Community Council, which represents areas including Park La Brea, the Melrose and Fairfax districts, Beverly Grove and Miracle Mile, are likely to be held by candidates that aligned themselves with the Mid City West Progressive Slate.

“Obviously, it’s a vindication that the community agrees with our progressive values and progressive platform,” said Michael Schneider, a progressive slate candidate who won a business seat after previously serving as a representative in Zone 2.

He pointed to the closeness of some of the results – two of which were decided by a single vote, one in his slate’s favor – as evidence of the importance of the election.

“When I was campaigning, I would tell people your vote would really matter and sometimes things are won by a vote or two – and that happened,” he said.

The neighborhood councils, which are overseen by the Los Angeles Department of Neighborhood Empowerment, were created to serve as advisory bodies to allow volunteers to advocate for their communities to elected officials on issues like development, homelessness and emergency preparedness.

The election, which featured all mail-in ballots, was held earlier this month. The results are considered unofficial and will be formalized by April 1. Winning candidates will take over their seats by the next general board meeting, scheduled to be held via Zoom on April 13.

Almost all of this year’s Mid City West candidates lumped themselves into a pair of slates, one focused on promoting progressive issues and the other focused on amplifying the voices of the community.

The Progressive Slate candidates are advocating for key policy positions, including promoting social and racial equity; accessibility in the region, whether it’s alternative modes of transportation or safe streets with vehicles; and addressing homelessness.

The Mid City West Community First Slate was formed as a response to what stakeholders felt was the progressive members acting outside their elected duties.

Given the massive amount of money that the Progressive slate spent on mailers and flyers I would say their win was more a function of BUYING an election with special interest money than it was “vindication” for policies that more long time residents & elderly voters have no support for. Mailing over 10,000 postcards wasn’t cheap and the Community First slate simply did not have this large amount of money available to them. The simple fact the Schneider was not well known in Zone 2 and couldn’t deal with the criticism of failing to reach out to a broader mix of residents in zone 2 kept him from running again for the zone 2 seat he previously held. He instead ran for an easier seat to win in order to maintain a place on the MCWCC board. Oh well.