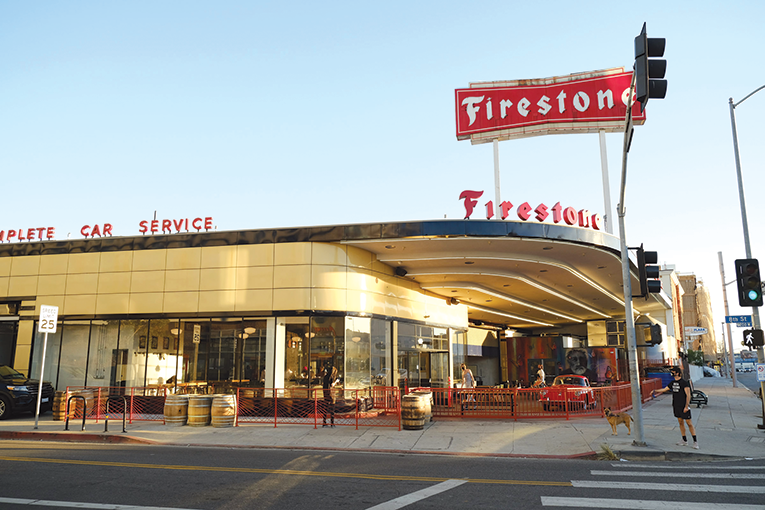 The building at La Brea Avenue and Eighth Street was restored in homage to its previous use as an auto service center. (photo by Conrad Starr)

Things are revving once again at a former Firestone service center at the corner of La Brea Avenue and Eighth Street after the building was renovated and reopened last week as a brewery and restaurant.

All Season Brewing Company, one of many Los Angeles restaurants, bars and breweries operated by the hospitality company Pouring With Heart, opened in the space at 800 S. La Brea Ave. on Feb. 24. The landmark building, which was designated a city of Los Angeles cultural-historic monument in 2012, was painstakingly refurbished, with many of the original features of the 1937 structure left intact, according to the new owners. Firestone closed the service center in approximately 2015.

“It was very important to preserve the space as much as possible,” said Matt Winter, of M. Winter Design, who spearheaded the design of the new brewery. “We looked at all of the features of the building and kept as many as we could. It was important to keep the look of the building’s exterior and we restored it back to its original appearance. The interior of the space was also left original.”

The renovation project took approximately four years. Winter said the plan called for the baked enamel panels, signs and surfaces to be refinished and repainted, a time-consuming process. The large neon Firestone sign remains atop the building and has been restored. Winter said windows from a car wash area were relocated behind the bar offering patrons a view into the brewing room.

“We did a lot of little things to make sure we kept the original character,” Winter added. “Because there was a change of use, we had to make this building work for the modern day. But I am a third-generation native [of Los Angeles] who understands the importance of preserving these buildings that have been forgotten. One of the things my company specializes in is giving a new look to old spaces, and this building was a special project.” 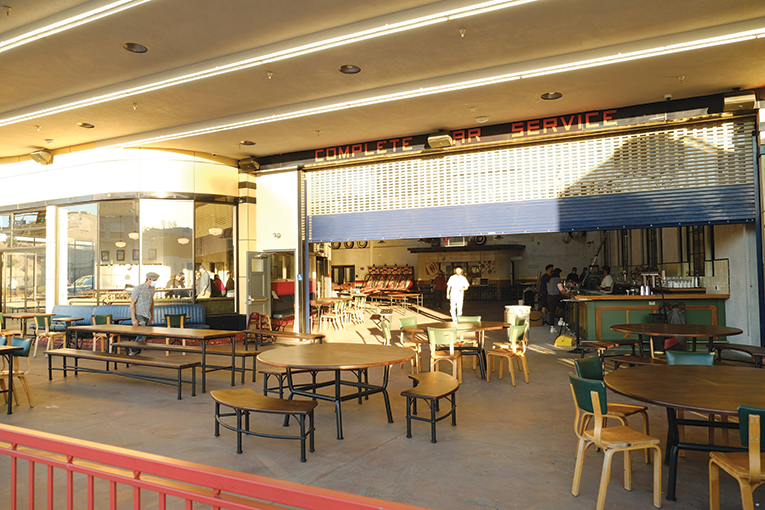 The patio at All Season Brewing Company has ample space for patrons. (photo by Conrad Starr)

All Season Brewing is currently open with outdoor seating. Hours are currently 3 to 10 p.m., Monday through Thursday; 3 p.m. to midnight, Friday; noon to midnight, Saturday; and noon to 10 p.m., Sunday. The brewery serves draught beers made on premises, as well as specialty cocktails and a full bar. Patrons can order food from Chicas Tacos, which oversees food service onsite, and dine on the patio. Tables have been spaced 8 feet apart, and masks and physical distancing are required. Food must accompany alcohol purchases. There is currently seating on the patio for 75 people during restrictions due to the pandemic, Winter said. Normal capacity on the patio is 195 people, with the building having a maximum capacity of 425 people, he added.

Residents in the surrounding community were pleased the building was preserved and has been reopened as a neighborhood-serving business. It was designated as a cultural-historic monument based on its Streamline Moderne architecture, according to the Los Angeles Conservancy. Conrad Starr, president of the Sycamore Square Neighborhood Association, said he hopes it is a success.

“It’s really pretty and it’s big. When you see people there, you see how large the restaurant is,” said Starr, adding that Pouring With Heart worked extensively with the neighbors during the planning process. “We’ve been waiting for this for years now. By the chatter on Nextdoor, it’s an eagerly anticipated institution in the greater area.”

Miracle Mile Residential Association President Greg Goldin also praised the preservation effort and the work it took to restore the building to its old appearance.

“Everyone was quite relieved that this landmark building was preserved and not destroyed,” Goldin said. “This is the sort of small-scale business we want. I think the building is a really good example of adaptive reuse because it preserves a building that is part of the heritage of the Miracle Mile. We should be grateful and happy the developer chose to do that instead of tearing it down.”

Winter encouraged members of the public to visit soon.

“My message is to come and enjoy a Los Angeles relic that has been completely restored for a new life, and the care and detail that went into restoring the space,” he added. “I hope people will look out for other buildings and make sure they take a stand to preserve L.A.’s history. “