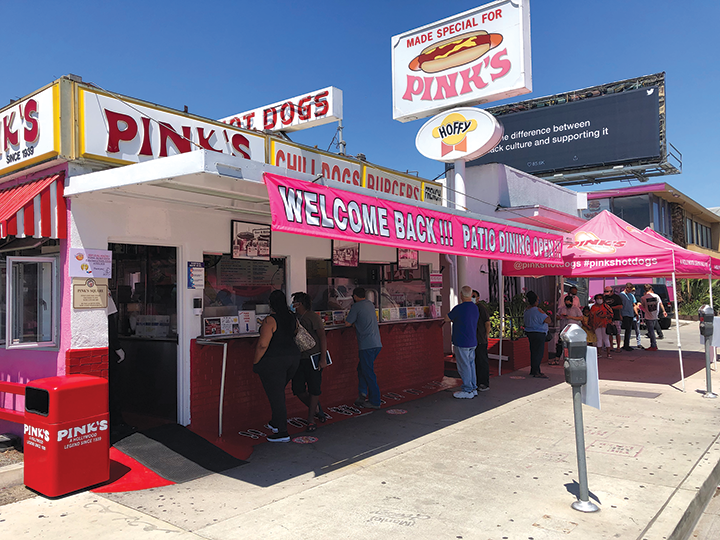 Pink’s Hot Dogs on La Brea Avenue was a favorite stop for former Los Angeles City Councilman Tom LaBonge, who frequently visited the stand for a bite to eat and the unique atmosphere at an iconic business in the City of Angels.

Now, Pink’s Hot Dogs and LaBonge, who passed away on Jan. 7, will be linked forever after the Hollywood Chamber of Commerce announced that Pink’s will receive the inaugural Tom LaBonge Community Spirit Award at the chamber’s annual Installation Gala at 6 p.m. on Thursday, March 18. The award was created to acknowledge a chamber member who has shared their spirit for the community and embodies values for which LaBonge stood, including family, community and dedication. The affable former councilman for the 4th District, who left office in 2015, was known to many as “Mr. Los Angeles” for his tireless love for the city.

Before it was announced this week that Pink’s Hot Dogs will receive the award, Pink decided to create a special hot dog in tribute to LaBonge that will be on the permanent menu beginning at noon on March 12. The Mr. Los Angeles Tom LaBonge Hot Dog is a Polish sausage topped with sauteed onions and mushrooms, bacon and nacho cheese. The hot dog is $8.95 and all proceeds from its sale from March 12-14 will be donated to the Tom LaBonge Griffith Park Memorial Fund.

Pink said the hot dog honors one of Los Angeles’s greatest cheerleaders. LaBonge usually stopped by the stand twice a week, he added.

“Tom represented the hope and the opportunity and the pride of our city,” Pink said. “We had to represent him with a hot dog because of all the good he did for Los Angeles, and I needed something that was as big as his personality. To me, Tom was always the big dog at Pink’s.”