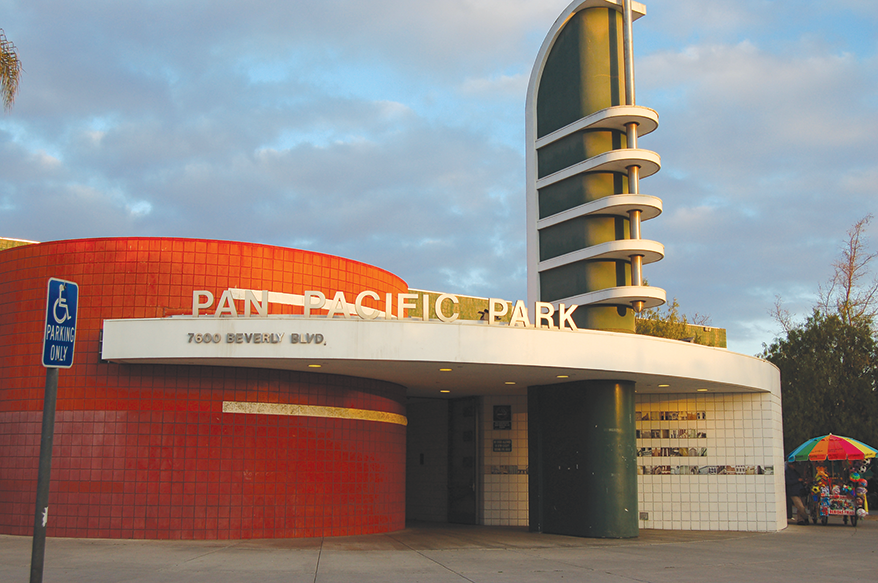 Approximately 75 people are currently staying at an emergency shelter for homeless individuals at Pan Pacific Park. (photo by Edwin Folven)

Emergency shelters created at Los Angeles Department of Recreation and Parks facilities are scheduled to close on March 31, but the Los Angeles County Homeless Services Authority has allocated resources to keep the emergency shelter in Pan Pacific Park open through the end of May, according to Raman’s staff. The additional time was necessary to prevent people in the process of transitioning into permanent housing from returning to living on the streets, Raman’s spokesman Jesse Zwick said.

“There is no plan for a permanent shelter in Pan Pacific Park or for the shelter to remain open past May 31,” he added.

Approximately 75 people are currently staying at the shelter. Once it closes on May 31, a renovation project will begin in the recreation center’s gymnasium, with plans for work to be finished by mid-summer and programs to resume, Zwick said.

In the meantime, Raman’s staff will work with the Department of Recreation and Parks and First to Serve, a nonprofit operating the emergency shelter, to ensure there are no recurring issues involving people camping around the recreation center or in the park. First to Serve is providing 24-hour security in the recreation center and has committed to helping people who arrive at the shelter when it’s full to find alternative housing, including offering transportation. The Department of Recreation and Parks has installed new lighting and security cameras around the facility.

“We are definitely sensitive to the fact that there has been overflow with people staying in the park, and we are working on solutions to that,” Zwick said.

He added that next two months are crucial in allowing a safe transition for shelter residents, and the councilwoman remains committed to ensuring the process continues unfettered. Plans for reopening the park facility will occur concurrently, he added.

Zwick said the senior center and Fairfax Branch Library on Gardner Street are not impacted by operations at the emergency shelter, and those facilities will reopen as soon as public health orders allow and the city determines it is safe.

Many residents in the area remain concerned about the shelter, and hope the park returns to its pre-pandemic state as soon as possible.

“This park serves many neighborhoods and now people are using it more than ever. Summer is right around the corner,” said a nearby resident who asked to be identified only as Gail. “I don’t think [the shelter] should be permanent. It wouldn’t be a positive thing.”

No mention of the huge increase in crime around the park? Huge encampments with wood structure and doors?

Looks like a puff piece to me. Let’s take care of the taxpayer along with the homeless!