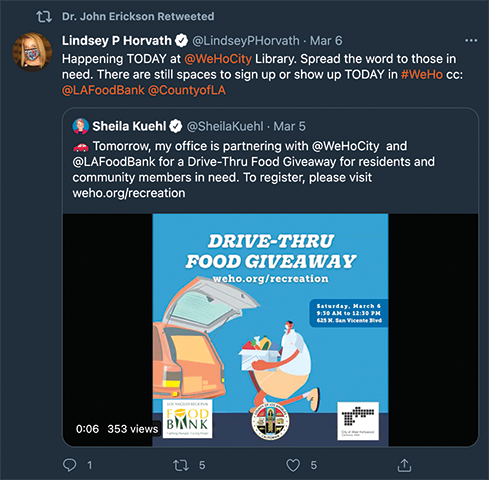 Members of the West Hollywood City Council will have to make changes to how they interact with each other on social media after approving an update to the city’s code of conduct that adheres to new state law about what elected officials can discuss online.

The council passed two separate motions during a meeting on Monday, March 15, to make four total changes to the code of conduct, which was last updated in 2016.

The council unanimously approved the first three suggestions from city staff regarding the code of conduct: the addition of gender-neutral pronouns to the code, adding recommendations from the city’s ethics task force that were approved last year that call for officials to recuse themselves from voting on city-funded grants to nonprofits if they serve on the board of the nonprofit, and the changes to the social media policy.

The social media was included to adhere to changes to the Brown Act, a statewide law that generally requires any legislative body to keep meetings and discussion open to the public, which went into effect this year.

West Hollywood City Attorney Lauren Langer said during the meeting that the changes ultimately limit how members of the council can interact with each other online, similar to limitations to how they interact offline.

She said that they will no longer be able to respond to another council member’s communication, comment or post if the topic concerns city business. They only can answer questions from the public, provide information to the public, solicit information about city business, repost city business or discuss private business among themselves. She suggested avoiding tagging one another in posts, responding to posts that multiple council members are tagged in, or starting a new thread if they are all tagged in something together.

“Social media is a big part of everybody’s lives. This new Brown Act rule was significant enough that it should go into the code of conduct,” she said.

Councilman John D’Amico asked if the policy only applies to unfinished and new business only – although Langer said that is a grey area because completed business might come back later.

“I would err on the side of caution,” she said.

Multiple council members asked for training with specific examples of what may or may not be acceptable to avoid any violations.

“There are so many nuances when it comes to social media … Really having all different types of specific examples and having training for everyone would be really helpful,” Councilwoman Sepi Shyne said.

Councilwoman Lauren Meister joked that there will be “no more hearts on Twitter, anymore.”

The council passed a fourth change to the code of conduct regarding conflicts of interest, with a 3-2 vote, that updated the city’s policy on accepting business in one’s personal or professional capacity that will come before the body of an elected or appointed official for a decision.

Examples provided by staff included a city commissioner who is also a lawyer representing clients in obtaining regulatory business licenses or development entitlements, a landlord or tenant lawyer serving on the rent stabilization commission, or an art consultant serving on the arts commission.

Langer said the changes recommend avoiding taking on the work, but in the case of a conflict of interest, a member of the legislative body should not only recuse themselves from discussing the item, but the entire meeting. Additionally, if they have a financial conflict of interest, they are asked to avoid any discussion of that item with city staff or the legislative body until the item is finished.

The proposal was supported by Shyne, Meister and D’Amico. Mayor Lindsey Horvath and Councilman John Erickson voted against it, with Erickson stating he felt the policy was “too broad.” Langer said they’d try to avoid those nuances with training.