‘Moxie’ misses by trying to cover too much 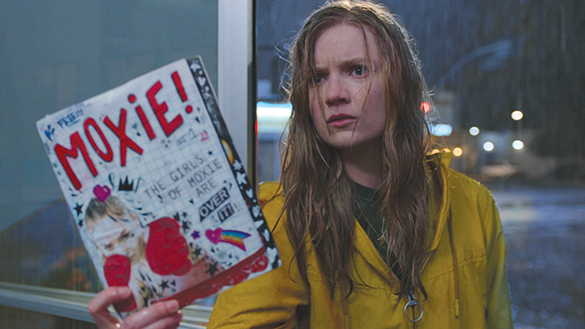 Vivian (Hadley Robinson) creates her own publication that turns into a movement in “Moxie.” (photo courtesy of Netflix)

Please make more films like “Moxie” that stress the necessity of social action at a young age. Please highlight sexism and complicity that allow patriarchy to coast by normalized. And please do some homework before producing future films.

“Moxie,” based on the novel by Jennifer Mathieu, plays like an essay without a clear thesis. Certainly the arguments are valid, but no single paper should try to be everything on a given topic. The outcome lacks focus, instead resembling a PowerPoint presentation on all the familiar points, presented as if common retorts are lightbulb revelations. Introvert Vivian (Hadley Robinson) hopes to find her voice, but she often caves to social pressure, favoring silence over confrontation. That changes when the cool kids post their yearly “awards” for female classmates, all as wretched as you’d expect, including a new one targeting transfer student Lucy (Alycia Pascual-Pena), who recently denied the advances of QB-patriarch-bully Mitchell (Patrick Schwarzenegger).

When Viv makes the cut as “most obedient,” she finally finds her voice with some help from her mom’s (Amy Poehler) glory days as a Riot Grrrl and old ‘90s zines, creating her own anonymous publication called Moxie and posting it in every girls’ restroom. Overnight, her friend group expands, as girls unite behind Moxie, never knowing its author, to vocally resist all the toxicity overtly on display, even protected by a principal (Marcia Gay Harden) averse to ruffling feathers.

Viv’s revolution comes with several hiccups. First, BFF Claudia (Lauren Tsai) remains uncomfortable with the movement. Initial clues hint at jealousy, but the real reason is much more complex. Viv also falls for longtime friend Seth (Nico Hiraga), who went through some changes over summer. And at home, mother and daughter clash as well, though their relationship began on rather solid ground. 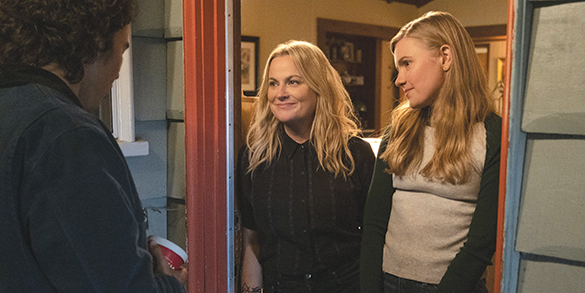 Amy Poehler and Hadley Robinson give good performances in “Moxie,” but the film covers too much subject matter.
(photo courtesy of Netflix)

Perhaps that all wouldn’t be so bad – films often summarize social woes – if the film provides something else along the way. Poehler, directing her second Netflix feature, shoots for something between “Mean Girls” and “Booksmart,” but each character is so focused.

And Viv’s more involved characterization doesn’t provide any laughs or tears, depending on if this film is a comedy or drama (it tries for both to mixed results). The most enjoyable element of “Moxie” involves some ‘90s nostalgia, both musically and sartorially. But such moments, like most, last mere minutes, often seconds, without any interesting glimpse into how the past can inform the present.

Poaching the past for inspiration is especially problematic. To the film’s credit, the notion of a white girl leading Moxie, and using largely white feminist inspiration, should cause pause. In what should be a key moment, Claudia unloads on Viv for her behavior, so focused on the movement, nothing else. “You don’t get what’s going on with me because you’re white,” she tells Vivian regarding what her mother “sacrificed to get to this country.” It’s a valid concern that festers in the subtext of a film so interested in a white savior. Alas, this revelation has zero impact on the rest of the story.

This moment is especially troubling considering how much “Moxie” rallies on ethnic and racial stereotypes, allegedly to disrupt them. It never does that since Viv is the sole character of consequence. Everyone else accents her coming-of-age journey.

“Moxie’s” greatest sin arrives in the final moments (minor spoilers here). A dramatic speech and melodramatic inspiration by others to rise up – confess personal traumas in front of a whole lot of people – creates a pandering climax. Reality isn’t this clean. It’s also callous to use such important issues – a rape here – as fodder for a tidy ending.

Now that public opinion seems to care less about millennials, Gen Z must weather a barrage of obnoxious bad-faith slights. “Moxie” briefly touches on that too before trudging along, serving as a high school equivalent to a CliffsNotes study guide on social justice rather than an in-depth volume.