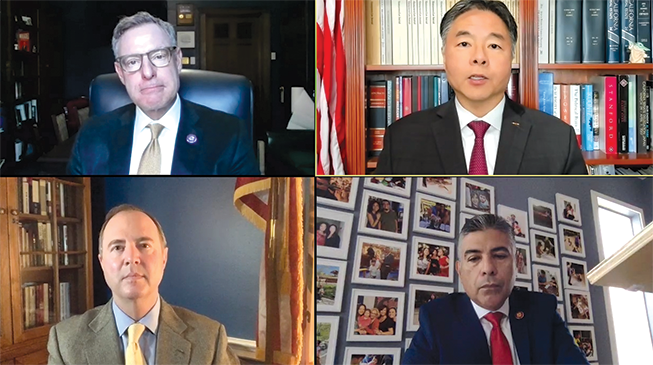 U.S. Reps. Adam Schiff (D-Burbank) and Ted Lieu (D-Torrance) held a briefing with other federal lawmakers from Southern California on March 11 to outline what people can expect from the American Rescue Plan, legislation that President Joe Biden signed into law the same day.

The $1.9-trillion relief package includes billions in funding for states and cities, as well as direct financial relief for families, individuals and those who are unemployed. Millions of Americans earning less than $80,000 a year will receive $1,400 stimulus payments, which the U.S. Treasury began sending out this week. The rescue package also includes funding for COVID-19 vaccines and recovery efforts aimed at getting the country back on track in the coming months.

“We are very excited that President Biden [signed] the American Rescue Plan. The intent of the plan is to get us on the road to recovery by helping to get shots into arms, kids into schools, cash into pockets and people into jobs,” Lieu said. “I’m very pleased that in Southern California, Los Angeles County is going to get approximately $1.9 billion from the American Rescue Plan.”

Lieu broke the plan down into three general categories. He said it will provide funding for more vaccine production and distribution, contact tracing and other programs to suppress the virus. It will also offer economic relief with stimulus payments and funding to continue unemployment insurance. Third, it will provide billions of dollars for local cities, which can decide the best ways to use the money in their jurisdictions. The city of Los Angeles will receive approximately $1.3 billion, while Beverly Hills will receive approximately $6.3 million and West Hollywood will receive approximately $6.8 million. The amount each city receives is based on population and formulas taking into account the age of the populace, poverty level and density.

Schiff said the American Rescue Plan was sorely needed and will provide help for struggling people until the virus subsides and the economy approves.

“I’m just thrilled with the passage of the American Rescue Plan. It’s going to help many tens of millions of Americans who are struggling right now to put food on the table and a roof over their heads. This is probably the most significant anti-poverty measure within a generation,” Schiff said. “It will provide a much-needed infusion of resources into the rollout of the vaccination. It will help us reopen our schools by giving them the resources they need to reopen and reopen safely. It will help small businesses with another infusion of resources. It will help cities and states avoid further rounds of layoffs.”

Schiff also highlighted a provision that will extend unemployment payments through Labor Day and provide an additional $300 per week. He said he fought for a provision that will provide unemployment payments for workers with multiple incomes, including actors, musicians and entertainment industry professionals. Those employees, referred to as gig workers, had been ineligible for compensation under a previous stimulus package in 2020.

“The mixed-earner provision is designed to really target that group that has multiple employment sources. Many are in a difficult situation because they have a small amount of W2, or traditional income, but get most of their income from 1099s. Because they have a small amount of W2 income, they were disqualified from getting the full benefit. We are not able to make them whole in terms of unemployment compensation, but we are able to give them that added benefit. If they were to lose one form of employment they would still qualify, but it might affect the amount of their unemployment compensation.”

Other lawmakers including U.S. Reps. Tony Cardenas (D-Pacoima) and Scott Peters (D-San Diego) discussed implications the American Recovery Act will have on their constituents in the San Fernando Valley and San Diego, respectively. Lieu concluded by saying he will continue working with colleagues in Congress to advance more legislation to provide additional relief, with the goal of ending the pandemic quickly and rejuvenating the economy.

“It’s a matter of priorities,” Lieu said. “Democrats believe providing unemployment benefits and getting schools reopened and shots in people’s arms is what we need to be doing right now, and that’s why we are doing it.”