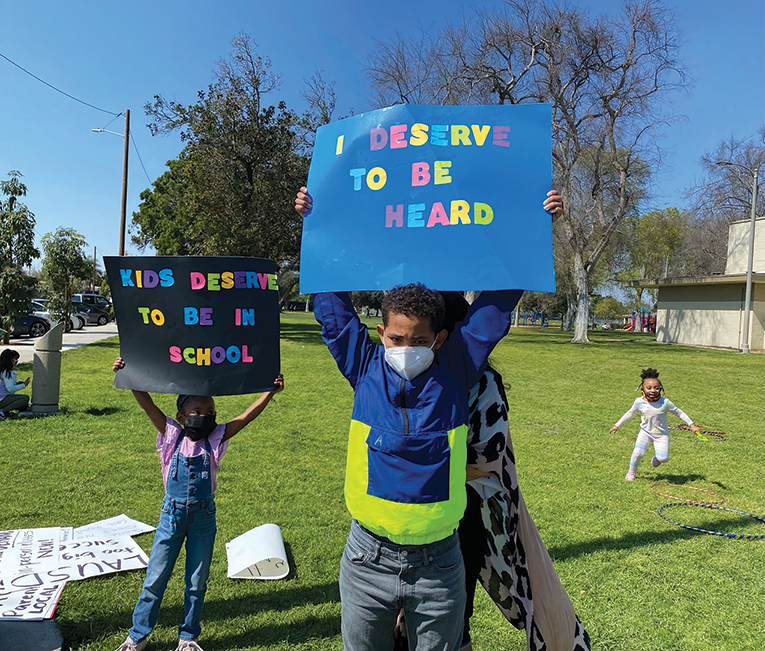 Students of color are likely to be negatively impacted by a continued distance learning model, Renee Bailey said. (photo courtesy of Renee Bailey)

With vaccinations increasing and coronavirus cases trending downward, the Los Angeles Unified School District is moving toward a return to school.

It’s been more than a year of virtual learning, but earlier this month, the LAUSD and United Teachers Los Angeles reached an agreement to resume in-person classes in April. The exact timeline depends on COVID-19 infection numbers and the amount of vaccination doses that have been administered.

UTLA did not return interview requests, and LAUSD Superintendent Austin Beutner was not available for an interview, but in remarks to the LAUSD community on March 15, he said the deal provides “for a hybrid model at all grade levels, combining in-person and online instruction with students remaining in small, stable cohorts while at school to help prevent the spread of the virus.”

With positive momentum, some parents of LAUSD students are pushing for the district to go farther.

At a pair of rallies held in Pan Pacific Park and in Ted Watkins Memorial Park in Watts on March 13, parents and students let school district and union officials know that while they appreciate a return to campus, the proposed system – which has high school students, who are physically at school, taking online classes with their teachers in separate classrooms – is not enough.

“We’re glad they’re doing something, we just had no idea it would be quite so minimal,” said Ross Novie, Pan Pacific Park protester and founder of the L.A. School Uprising, a nonpartisan group seeking a return to in-person education. “Absolutely, it’s something, and we’re happy it is something, like you’re walking in a desert and get a drop of water.”

Given the limited return to in-person classes this year, Novie said it’s clear that the district did not have “a plan coming back to the semester,” and he’s hopeful that there will be a better plan in place for the fall so students can return to traditional classes.

“Let’s accept that we failed [to return to in-person school this year], let’s make it better for next semester, because so many parents are concerned that we’ll have to do this again … We want to be able to know our kids can go in person in the fall,” Novie said.

Renee Bailey, an LAUSD parent who joined the Ted Watkins Memorial Park protest hosted by the Women of Watts, said if students can’t return to traditional in-person classes in the fall, it will further hurt children’s development, and even more so for people of color, who have been disproportionately impacted by the pandemic.

“These communities have always fared well behind other parts of Los Angeles, academically, and it’s absurd to me that they’re not working faster to get these kids back to school,” Bailey said.

Bailey believes that the LAUSD leadership must do more to ensure the 2021-22 school year is as close to normal as possible, with students learning from teachers in the same classroom instead of on Zoom.

“My fear is that if Beutner doesn’t make some sort of commitment to parents and children in Los Angeles, we’re going to see the same plans put in place for the fall school year, which will again put our minority children grossly behind, academically,” Bailey said. 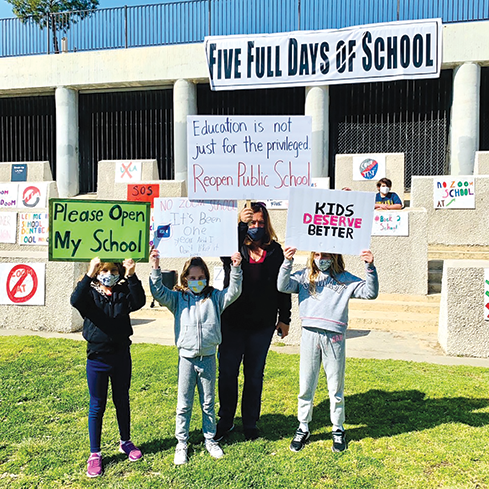 Parents of LAUSD students are working to ensure that the 2021-22 school year will be held in-person and that teachers will be in the classrooms with students. (photo courtesy of Ross Novie)

In his address, Beutner said the LAUSD is cognizant of the impact of virtual learning, especially for disadvantaged students.

“We know the best learning for most students happens in a school classroom and the opportunity gaps for students from low-income families will only widen if they are not back in a school classroom. This is an urgent challenge for all of us, not just schools, to see what we can do about this and do about it now,” Beutner said.

LAUSD board member Nick Melvoin, 4th District, said he is working toward an in-person fall semester.

“It is my hope that the fall schedule will look as close to normal as possible, assuming public health conditions continue to improve,” he said. “If we can finalize our plans and provide school administrators ample time to prepare their master schedules in advance, I believe this will be feasible.”

While the struggle continues over a return to traditional school, Novie said it’s important to note that this is progress, even if it’s not ideal.

“I am glad we are going back to in-person,” Novie said. “However lame it is, I will take that in a heartbeat. We have to do a lousy version of hybrid now to make sure that we’re not doing this in the fall. I’m glad they did that, it’s just that I know very clearly how limited it is, but I’ll take that over distance any day.”

BH pushes back on Gascón