LaBonge was top dog at Pink’s on La Brea 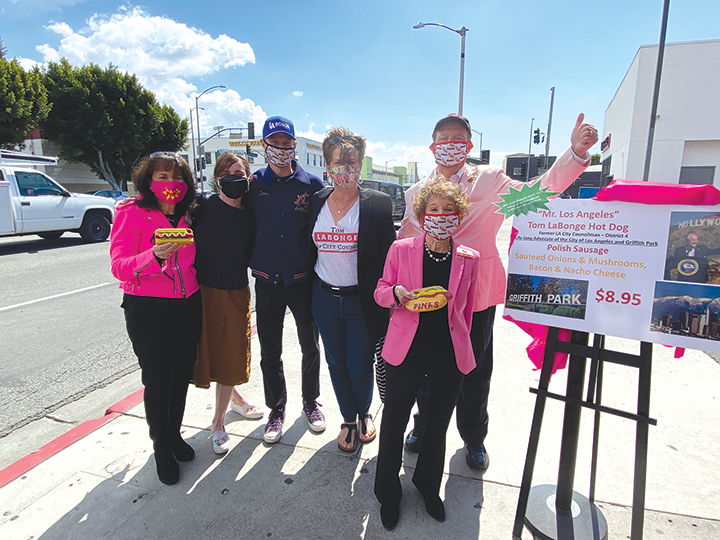 Owners Richard and Gloria Pink and Beverly Pink-Wolfe welcomed guests and unveiled the new hot dog, which many attendees enthusiastically enjoyed with a side of French fries. LaBonge, who represented the 4th District from 2011-15, died on Jan. 7. Known as a tireless cheerleader for the city Los Angeles, LaBonge visited Pink’s Hot Dogs at least twice a week and loved sharing the experience of being at an L.A. landmark with other guests, Pink said.

“What Tom meant to me and my family is how he felt about Los Angeles. He loved the city and we loved him,” he added. “Tom was a cheerleader and a booster for Los Angeles, and loved the people of our great city. I had to dedicate a hot dog [to] him at Pink’s.”

LaBonge’s wife, Brigid, and children, Charles and Mary Cate, were joined at Pink’s by his four surviving brothers, Bobby, Denis, Mark and Tim LaBonge, as well as numerous former staff members and friends. Brigid LaBonge said her husband would have enjoyed the recognition.

“This would have been one of his top honors. We love the recognition and are very grateful,” she said. “Basically, [Pink’s] was one of his second homes. For our family, this is really special.”

Denis LaBonge also said the family was grateful and he and many other family members only recently learned about his brother’s many personal achievements.

“Tommy was very understated in his relationships with his family. He never told us what he did,” Denis LaBonge added. “We knew he was a councilman, but we never knew how important he was to the city. There were a lot of things that wouldn’t have gotten done if he hadn’t stepped in. He was a major facilitator of compromise.”

“He had a big heart and a big personality. Everybody knew him and he had an uncanny ability to remember people,” Yaroslavsky said. “He would drop by my house all the time and drop off pictures he had taken. One funny thing about Tom is when I’d be jogging in Hancock Park, he would always stop and yell hi to me. You always knew when Tom was nearby.”