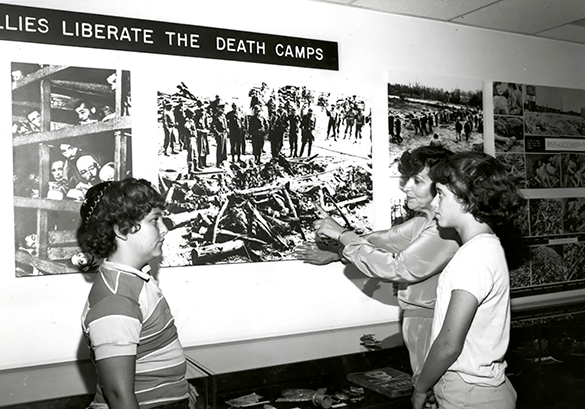 In honor of Women’s History Month, Holocaust Museum LA presents “Inside the (Acid-Free) Box: Female Founders of Holocaust Museum LA,” on Tuesday, March 30, at 4 p.m. The virtual viewing of the museum’s archives, led by Jordanna Gessler, the museum’s vice president of education and exhibits, and Christie Jovanovic, collection manager, will explore the stories and artifacts of two of the co-founders, Esther (Anna) Przeworski Pratt and Masha Loen.

The first survivor-founded Holocaust museum in the U.S., Holocaust Museum LA was established in 1961 by a group of survivors who envisioned a place to honor their loved ones, educate future generations and inspire a more dignified world. They each had a photograph, document or personal item they had saved; these became the foundation of the vast archival collection that the Museum holds today.

Two women, Pratt and Loen, were part of that original founding group. Each a trailblazer in their own right, these women were dedicated to educating the public about the Holocaust and keeping this history alive at a time when few were willing to discuss it.

One of eight children, Pratt (née Epstein) was born in Częstochowa, Poland, to parents Icek and Frajjdla. She earned her law degree at the University of Warsaw and practiced law in Częstochowa, becoming one of only two female lawyers in her hometown. When the Nazis invaded Poland, she and her family were confined to the Częstochowa Ghetto. Separated from the rest of their family, she and her sister Tamara were selected for slave labor at the HASAG-Peltzery camp in Częstochowa, where they were forced to work in a munitions factory. The sisters survived Ravensbruck and Dachau and were liberated by U.S. soldiers in April 1945. After liberation, she worked as a judge and public prosecutor in the U.S. occupied zone. She attended the Nuremberg trials and in 1949 testified as a key witness in the HASAG-Peltzery Camp trials. The sisters ultimately immigrated to the U.S., arriving in New York in 1949. Esther worked as a secretary in a club for Jews from Poland, where she met Andrew Przeworski Pratt and the couple married in 1952. The pair moved to Los Angeles in 1953 and were active in many causes dedicated to Holocaust remembrance and education, including the 1939 Club and the Martyrs Memorial and Museum (later Holocaust Museum LA).

Born on July 28, 1928, in Kovno, Lithuania, Loen (originally Mariashka Sapoznikow) was 11 years old when her family was forced into the Kovno Ghetto. Loen, her mother and her two younger sisters were deported to the Stutthof Camp and their father to the Dachau Camp. Loen endured slave labor, starvation, beatings, multiple bouts of typhus and a death march; she was liberated in March 1945. After the war she met her husband, Cornelius, while he was working for the Allies in Germany, and the couple immigrated to the U.S. in 1949. In California, she started her own fashion design business, while also working tirelessly to commemorate her family and educate the community by dedicating her efforts to the mission of Holocaust Museum LA (known then as Martyrs Memorial and Museum).

A minimum $12 donation is requested; a link to the tour will be provided upon registration.

For more information and to register, visit holocaustmuseumla.org.