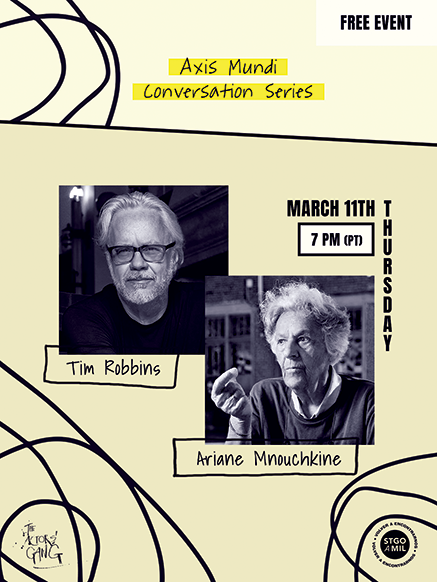 The Actors’ Gang Theater announced Axis Mundi – In Conversation with Ariane Mnouchkine and Tim Robbins, a free event that will be streamed Thursday, March 11, at 7 p.m. on Zoom and Facebook Live.

The event, which is produced in partnership with Fundación Teatro a Mill, will be translated into French and is part of the theater’s digital season. The live translation is only available through Zoom.

Mnouchkine’s work has been influential to the Actors’ Gang. Her unique and visionary philosophy of theatrical expression was introduced to the Actors’ Gang in 1984 through a workshop led by George Bigot after the Théâtre du Soleil took the Olympic Arts Festival in Los Angeles by storm. The training received in that workshop had a profound effect on the future direction of the Actors’ Gang.

Hosted by the Actors’ Gang’s Artistic Director, Tim Robbins, Axis Mundi is a bi-monthly series of public forums that introduces the audience to creative minds from all around the world.

With each conversation, the theater company is bringing together artists who shape cultures and ask vital questions about the future of theater and the arts and what it means to create in pandemic times.

In pre-pandemic times, with the Axis Mundi series, the Actors’ Gang has hosted many special evenings with guests from music, literature and journalism, including Jackson Browne, Bill Moyers, Sister Helen Prejean, Gore Vidal, Juan Gonzales and many others, who shared their wisdom and talent on stage. Each of these public forums strives to help the community bridge the gap between isolation and despair to a sense of community and shared hopefulness.

All digital programming is pay-what-you-can except for Axis Mundi and “Beginning, Middle, and Workshop” evenings, which are free; however, donations are encouraged.

‘Raya’ is best flick from Disney in a long time