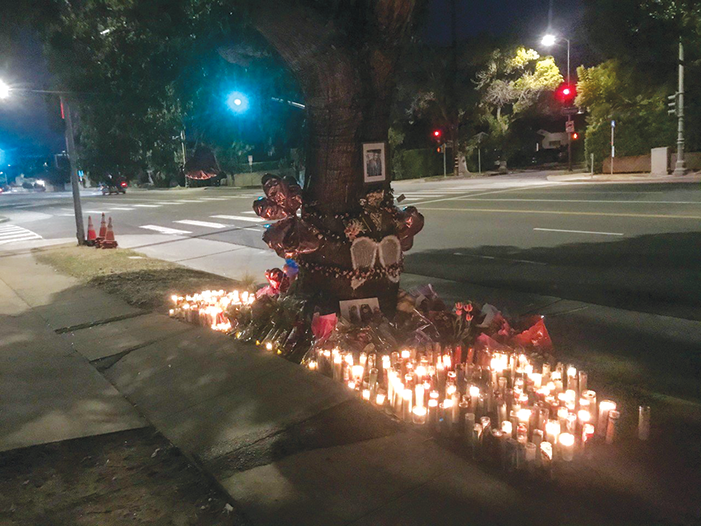 A memorial was placed near Olympic Boulevard and Overland Avenue for Monique Munoz, who was killed in a collision on Feb. 17. (photo courtesy of the LAPD’s West Traffic Division)

Charges are still pending against a Beverly Hills teenager who was arrested for allegedly killing a female driver during a collision on Feb. 17 in West Los Angeles.

The teen driver, who has been identified in media reports as 17-year-old Brendan Khuri, is still recovering from injuries sustained during the collision on Olympic Boulevard near Overland Avenue. The black Lamborghini SUV he was allegedly driving at a high-rate of speed collided with a Lexus sedan driven by Monique Munoz, 32, who died at the scene, police said. Initial reports indicated the Lamborghini driver was racing another vehicle, but that has not been corroborated by police. The teen driver was hospitalized on the night of the collision.

Detective James Dickson, with the Los Angeles Police Department’s West Traffic Division, said the suspect was booked for vehicular manslaughter on Feb. 23 in absentia due to being hospitalized, and the case was presented to the Los Angeles County District Attorney’s Office.

“Absentee booking is identical in consequence to being physically arrested and transported to a jail facility and is reserved for use in exceptional circumstances such as these, where the person being processed cannot be physically present,” Dickson said in a statement. “A juvenile, even if arrested and booked in person, is routinely given a summons to appear in juvenile court within a 60-day window and then released to the custody of a parent or guardian. In line with this process, the juvenile in this case was given a summons and released to a parent to continue receiving medical treatment. Charges have been presented for filing in this case and are being reviewed by the Los Angeles County District Attorney’s Juvenile Section. Whether these charges are filed and precisely what charges are filed are the sole purview of that office.”

“Monique’s death is a giant loss for her family, our community and for all of us as Angelenos,” Santiago said in a statement. “This case was recently presented to our office and is under review. Juvenile court proceedings, records and case files are confidential. As such, we are unable to provide further information at this time.”

Khuri has been identified in media reports as the son of James Khuri, a Beverly Hills businessman who developed and distributed Pokemon, Yu-Gi-Oh! and Magic the Gathering trading cards. The elder Khuri allegedly gave his son the SUV for his birthday, media reports have stated. Photographs on social media showing James and Brendan Khuri posing with different Lamborghinis, including the SUV allegedly involved in the collision, have been removed from social media.

Authorities declined to release any further information because of the pending charges. Anyone with information is urged to call LAPD West Traffic Division investigators at (213)473-0234.