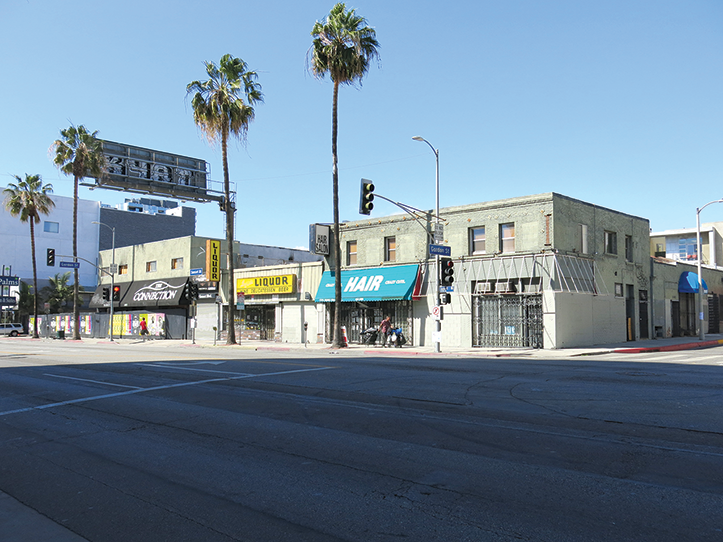 The existing structures on the site at Sunset and Gordon are expected to be demolished. (photo by Cameron Kiszla)

A seven-story, mixed-use building could be coming to the corner of Sunset Boulevard and Gordon Street in Hollywood, plans filed with the city of Los Angeles show.

The project at 6001-6023 W. Sunset Blvd. was proposed by a limited liability corporation named after the site’s address – 6007 Sunset – whose vice president is listed on the application as Shaul Kuba, co-founder and principal of CIM Group. Requests for comment from Kuba and the project’s listed representative, Michael Gonzales of Gonzales Law Group, were not returned before press time.

Plans were submitted to Los Angeles City Planning last month, and if the project is approved as proposed, it will comprise 110 units, of which 10-11 will be affordable, according to the application.

“The anticipated unit mix for the entire project is 32 studios, 39 one-bedrooms and 39 two-bedrooms,” the developer wrote in the application documents.

The units, located on the fourth to seventh floors, will be “oriented around a large central courtyard providing natural light and fresh air to the interior of the building,” the developer added. In total, the project comprises more than 101,000 square feet of floor area.

The site stretches a full block on Sunset Boulevard, from La Baig Avenue to the west to Gordon Street to the east, and includes nearly 15,000 square feet of commercial area on the ground floor and 239 parking spaces located in a multi-story garage that contains a subterranean floor, a ground floor and the building’s second and third floors. In total, the project comprises more than 101,000 square feet of floor area.

According to the application, the existing structures – which includes the former sites of a liquor store and hair salon and 15 housing units that have been vacant since 2017 – will be demolished to make way for the 80-foot-tall building.

“Tenant(s) for the ground floor and any potential tenant layout will be determined at a later date,” the developer wrote.

The developer highlighted how this project will mesh with the neighborhood, “an internationally recognized commercial corridor, and home to various music and television studios and theaters,” including Sunset Gower Studios, located only a block away.

The taller building will also fit in with a 16-story office building under construction at 5901 Sunset Blvd and the 22-story Sunset Gordon tower, another CIM Group project located across the street from the new project site, the developer added.

“Once constructed, the project’s height and massing will fit seamlessly within the Sunset Boulevard’s landscape,” the developer said.

Tony Arranaga, a spokesman for Los Angeles City Councilman Mitch O’Farrell, 13th District, said O’Farrell “will wait until the Department of City Planning completes their evaluation of the project’s application before taking a position.”

“In the past, the council member has been supportive of other mixed-use projects along Sunset Boulevard that have increased the amount of covenanted affordable housing and employment opportunities,” Arranaga added.