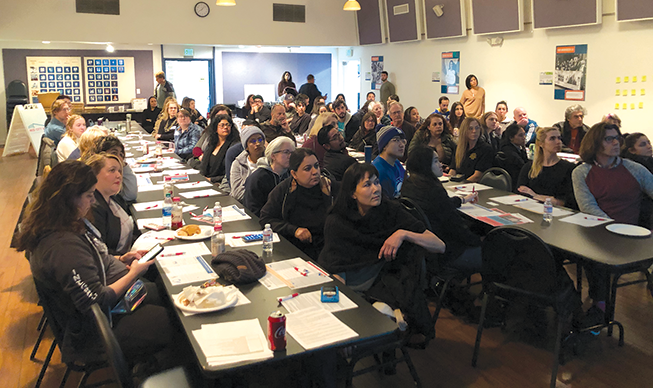 Numerous volunteers joined last year’s effort to count people who are unhoused in the Mid City West area, and the Midtown Los Angeles Homeless Coalition expects a good turnout for this year’s count on March 31. (photo courtesy of Arnali Ray)

After the COVID-19 pandemic forced the Los Angeles County Homeless Authority to cancel its annual homeless count in January, local grassroots organizations have stepped in to count those who remain unhoused and ensure they are not forgotten.

The Midtown Los Angeles Homeless Coalition, which has partnered with the Mid City West Community Council since 2015 to conduct the annual homeless count in the Melrose and Fairfax districts, Beverly Grove and the Miracle Mile, is planning to hold its own count on March 31. Modeled after a similar effort in Hollywood on Feb. 25, the Midtown Los Angeles Homeless Coalition’s count will help gauge the severity of the problem, organizers said. Volunteers are needed and online training is provided.

On March 31, the volunteers will go out in small teams of two or three people and drive around the neighborhoods counting people who are unhoused. The numbers will help inform nonprofits about the level of services needed to help the homeless population, and they could be used to show where more public funds and resources should be allocated. Organizers plan to also share the information with public officials.

“I think with all that’s going on, volunteers are really motivated and excited to engage in something that will help their community, and a lot of the local coalitions and advocacy groups started putting their heads together,” said Arnali Ray, who is organizing the event for the Midtown Los Angeles Homeless Coalition and is also a newly-reelected board member on the Mid City West Community Council. “We have about 50 volunteers already. We are happy to get out on the local level and we are happy to share the data we are collecting as a way to gauge what type of resources we need locally.”

Hackman Capital Partners, owner of Television City, is partnering with the Midtown Los Angeles Homeless Coalition for the count. A space at Television City will be used as a staging area. Volunteers will assemble there and be divided into groups, and each will canvass different census tracts in the community from 7 to 10:30 p.m., before returning to turn in their tally sheets.

“They basically go up and down the streets and count people, count tents, count RVs and people possibly staying in vehicles,” Ray added.

“Homelessness is one of the most pressing issues facing Los Angeles. Television City is proud to partner with the Midtown Los Angeles Homeless Coalition and support this year’s Mid City West homeless count,” Sokoloff said. “This effort will ensure that much needed services are sufficiently funded and effectively delivered and help our community continue to recover from the COVID-19 pandemic.”

“LAHSA canceled the count, and in Hollywood, because we have such a density of service providers, we thought it was a setback that would harm our efforts to help homeless folks,” Abramson said. “We couldn’t wait another year to see how the pandemic and the response to it would affect the homeless population.”

Abramson said data from the Hollywood 4WRD count are not ready to be released, as plans call for it to be analyzed by USC and UCLA statisticians. He said the information will be available in the coming weeks and it will be shared with the public and government officials. Service providers in Hollywood such as the Center at Blessed Sacrament, Covenant House and others will use the information to determine what they will need to serve their clients, and how much funding will be necessary.

Scott Epstein, outgoing chair of the Mid City West Community Council, is enthusiastic that the Midtown Los Angeles Homeless Coalition is taking the initiative and holding its own count. He credited Ray, who also serves on the board for Hollywood 4WRD, and Midtown Los Angeles Homeless Coalition member Emily Kantrim for leading the charge and making the project a reality.

“The count has been a really important activity for Mid City West. This will be the seventh time,” Epstein added. “We think it is really important to have this data to see what’s going on with our unhoused population. We think it’s important for the community to understand it.”

For information and to volunteer for the count, visit eventbrite.com/e/mid-city-west-all-voluntary-homeless-count-tickets-145803509221oir email lindsey17chase@gmail.com.