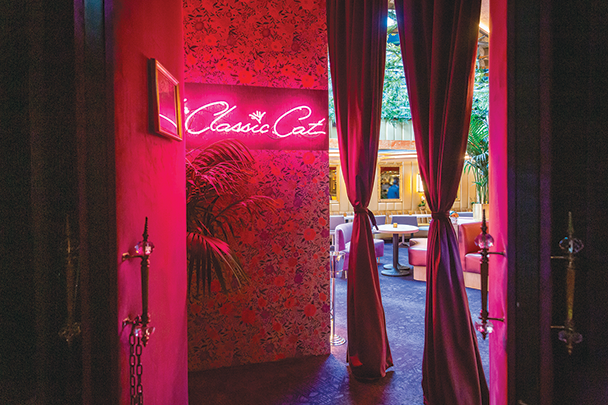 Owner Donn Berdahl said that if Classic Cat closes a third time, it may spell the end for the Sunset Strip restaurant. (photo courtesy of the Classic Cat)

A judge initially denied a request for a temporary restraining order to reopen the Classic Cat restaurant, but the owners of the refurbished eatery on the Sunset Strip did open their doors this week after California loosened restrictions to allow indoor dining.

During a hearing last Friday, Santa Monica Superior Court Judge Elaine W. Mandel delayed a final ruling for the restaurant, located at 8830 Sunset Blvd., as part of a civil rights lawsuit filed by the owners against the city of West Hollywood and Los Angeles County Public Health Department.

The judge’s decision was made with the caveat that changes to dining restrictions could occur in the next few days, with a show-cause hearing scheduled for Wednesday after press time.

The Los Angeles Superior Court suit claims the city and the county health department unfairly deemed their patio – which has a retractable roof – as indoors. The city and health department have maintained that it does not meet a 50% threshold to be considered outdoors, initially the conditions for reopening as part of the state and city’s efforts to curb the spread of the ongoing coronavirus pandemic.

Meanwhile, the state officially moved Los Angeles County into the red tier on Monday, which allows select businesses to reopen, including restaurants, which can operate indoors at 25%. Additionally, museums, zoos and aquariums; gyms, fitness centers, and yoga and dance studios; movie theatres; retail; and indoor shopping malls all can open or expand their capacity indoors, although none are allowed to be above half-full.

Donn Berdahl, co-owner of the Classic Cat, said Monday, March 15, that the restaurant planned to reopen on Tuesday, March 16 – marking the first time they’ve allowed customers since Feb. 23 and second time overall since their planned March 2020 reopening was delayed due to the pandemic.

Berdahl said the restaurant’s regular capacity is 110 people – meaning they’ll be able to accommodate 27 guests at a time, or about 5 1/2 tables. When they opened for the first time during similar circumstances for a brief stretch in July, he said they were barely able to pay their bills.

He labeled the current survival scenario as “razor thin.”

“We’re going to do our best to see if we can make a go at it,” he said. “We plan on going full steam forward. Hopefully we have enough people and generate enough income to pay our employees and pay our rent.”

He said that the restaurant has already turned down 190 reservations after the lawsuit was filed and subsequent media coverage.

“The demand is there. We think that we still have a viable entity for that part of the world and something that we would like to go back to,” he said.

The restaurant closed after city and county inspectors issued a citation, prompting the lawsuit that alleged that they were targeted by the city and county and did not have a right to due process.

The city of West Hollywood previously said in a statement that all city businesses “have a duty and responsibility to comply for the safety of their guests and employees.”

“While the city of West Hollywood cannot comment on any specific legal actions, the city is in the jurisdiction of the Los Angeles County Department of Public Health and the city actively enforces the L.A. County Health Officer Order and related protocols,” the statement said.

Earlier this month, the public health department sent a letter to the owners clarifying that the state has said that all permanent patios fall under the same guidelines for temporary structures.

Berdahl said that even with the judge’s initial ruling – and the reopening – they’re going to move forward with the lawsuit to recoup lost capital, damages and attorney fees. He’s said they’re missing out on $5,000 a day in revenue and potentially $20,000 for events.

“It’s a battle of survival and we’ve come this far. I’ve put my life savings in this, so what’s the alternative, close up shop?” he said. “The damage that has been done has been done. We know we’re fighting a monolith that has unlimited funds and time. We’re not naive to the fact that this is an uphill battle.

“If we shut a third time, obviously that’s a death knell,” he added.