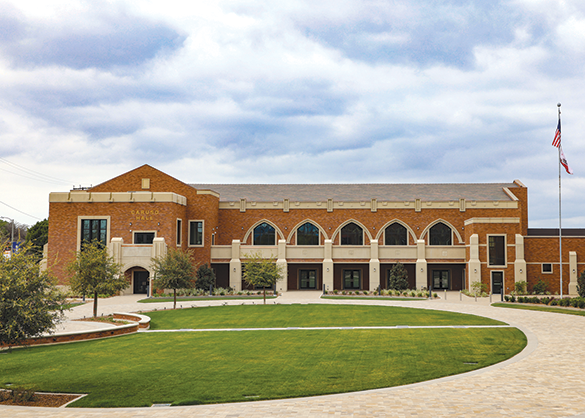 Loyola High School of Los Angeles, the oldest continually operated educational institution in Southern California, has unveiled Caruso Hall, a more than 26,000-square-foot, state-of-the-art building that has transformed the western side of the 21-acre campus.

Caruso Hall, named after businessman and developer Rick J. Caruso, is a pivotal component of the $34-million 1901 Venice Boulevard Capital Campaign that has reimagined how Loyola prepares for the future. Through the Caruso Family Foundation, Caruso and his wife, Tina, donated $4.5 million to the Jesuit preparatory school’s new building, as well as $500,000 to endow a four-year scholarship for a high-performing, low-income student from an underserved Los Angeles neighborhood. It was the largest single gift that Loyola has received for the 1901 Venice Boulevard Capital Campaign. Caruso, owner of The Grove, is chair of Loyola High School’s board and parent of a former Loyola student.

“Taking Loyola into the next century was the board’s goal, as was retaining Loyola’s mantle as one of the finest Jesuit schools in the country. It was clear that what Loyola needed to do to continue to be an elite Jesuit Catholic educational institution was to build, both academically and physically, to literally reach out to this new century and capture the future,” Caruso said. “A Jesuit Catholic education forms and leads. Loyola makes all the difference in the world to the young men that come here – it’s a game changer. Tina and I are honored to be part of this next step as Loyola charts the next hundred years.”

Caruso Hall, which will be used for more than 200 events a year, has a sacristy to service liturgies. It also includes hidden retractable walls that transform the Grand Hall into three separate rooms, multiplying the size of the space; state-of-the art integrated communications and AV equipment; a full-service banquet kitchen capable of serving 800 guests; a multi-purpose student kitchen; and ADA-compliant restrooms. Caruso Hall was designed by the Los Angeles architectural firm KFA Architecture.

“When we embarked on the 1901 Capital Campaign, drawing up the plans for the new gateway to our campus, we envisioned what Loyola could be, what Loyola should be, what Loyola would become,” said Rev.. Gregory M. Goethals, president of Loyola High School. “We are very grateful to the members of our community that have been on this journey with us, our many benefactors and friends. I especially want to thank Rick Caruso for his vision throughout these years as we moved forward with plans for the 21st-century Loyola. His generosity, leadership as board chair and strong belief in our mission helped to make this all possible.”

In addition to Caruso Hall, the 1901 Venice Boulevard Project also enhanced Hayden Circle with a wrought iron front gate that spans the entrance to the school, and included the new Grad-at-Grad Walkway showcasing attributes Loyola students aspire to upon graduation.