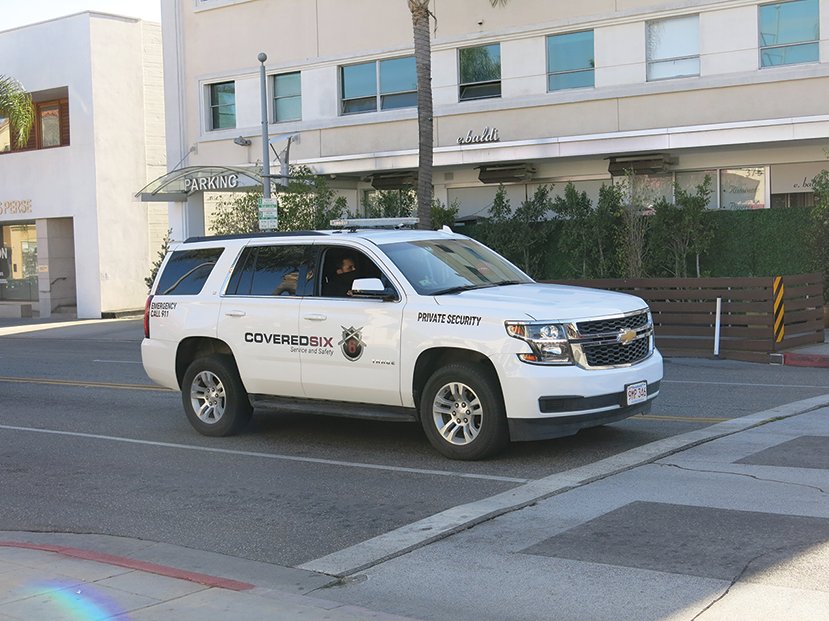 The BHPD is working with private security firms to provide a high-profile law enforcement presence. (photo by Cameron Kiszla)

The Beverly Hills Police Department is working with local and federal law enforcement agencies to solve a robbery on March 4 in which a woman dining at a popular restaurant on Canon Drive was shot and a patron’s $500,000 watch was stolen.

The violent robbery and shooting occurred at 2:10 p.m. at Il Pastaio, located at 400 N. Canon Drive. Three male suspects approached a man dining on the patio and a struggle ensued when they tried to take his watch, police said. One of the assailants was armed and the gun fired during the struggle between the suspect and victim, striking a woman nearby, BHPD Capt. Max Subin added. Officers recovered a handgun dropped at the scene, he said.

The victim who was shot was treated and has since been released from the hospital, Subin said. A second woman was knocked to the ground by people running from the gunfire and sustained non-life threatening injuries, he added.

The robbery is believed to be part of a string of hold-ups occurring in nearby neighborhoods of Los Angeles in which suspects stole Rolex watches and expensive jewelry, Subin said.  Similar armed robberies have occurred during the past two months in the Melrose Avenue shopping district and near Third Street and La Cienega Boulevard and are being investigated by the Los Angeles Police Department’s Wilshire Division.

“We are investigating and do believe it is connected,” Subin said. “Federal (law enforcement) agencies have also gotten involved because of the nature of the crime. Our detectives worked tirelessly over the last weekend and we are actively investigating.” 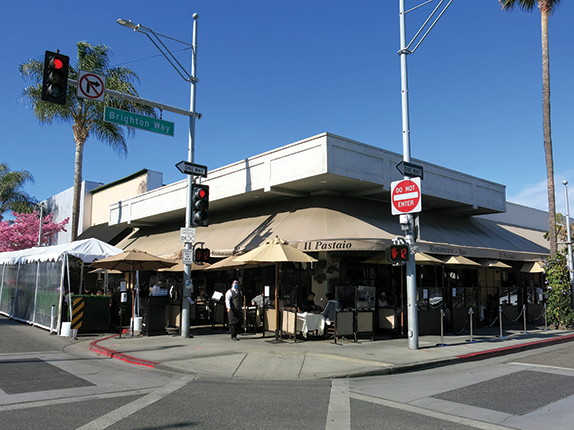 The robbery at Il Pastaio restaurant on Canon Drive has prompted an increase in security patrols in Beverly Hills. (photo by Cameron Kiszla)

Belhassen has offered a $50,000 reward, according to multiple media reports. Subin described the suspects as Black men, but had no further description.

The robbery prompted the BHPD to increase patrols in the business district and contract with private security companies to provide a high-profile law enforcement presence. BHPD interim Chief Dominick Rivetti reassured the community that extra steps are being taken to solve the crime and protect safety.

“First and foremost, safety is our top priority in Beverly Hills, and criminal activity of any kind will never be tolerated. I want the world to know that Beverly Hills is a very safe community. We invest significantly in our police department to ensure our officers have every resource necessary to do their jobs effectively,” Rivetti said in a statement. “We will be supplementing our personnel with armed private security guards who will have a strong visible presence in the city. We work closely with our businesses so that shoppers and restaurant guests feel comfortable and secure. And, we are vigilant in investigating and bringing to justice those who make the grave mistake of committing crimes here. We will keep the community updated on this incident, but in the meantime, please rest assured that the Beverly Hills Police Department is taking every possible measure to ensure your safety and security.”

Subin said the city is working with two private security companies – Nastec and Covered Six – to provide armed guards in the business district. The guards will patrol on foot and in vehicles from 11 a.m. to 11 p.m. and will remain in Beverly Hills indefinitely.

“They provide a large presence down in the business area,” Subin added. “They are a great force multiplier and a great tool for high visibility.”

Anyone with information about the robbery is urged to contact BHPD investigators at (310)550-4951.