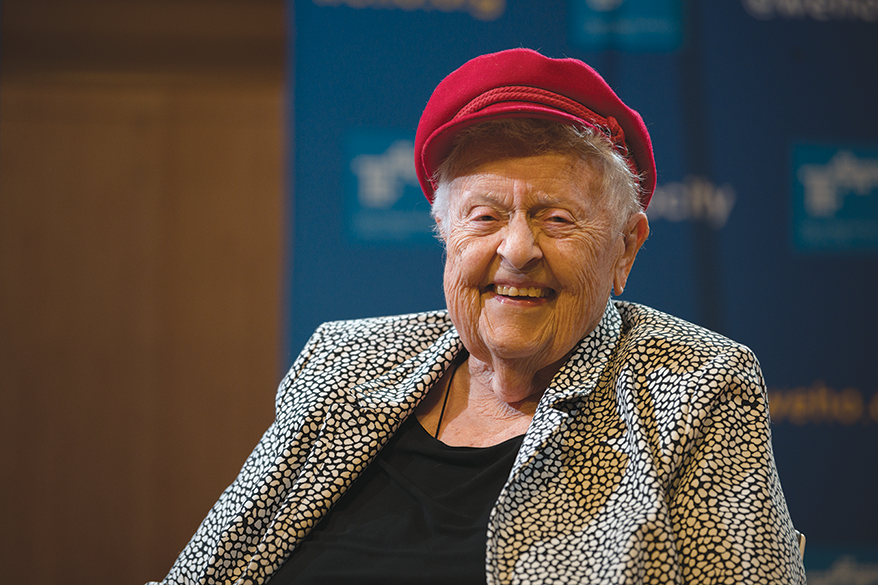 Ivy Bottini, one of the founders of the National Organization for Women in New York City, died at 94. (photo by Jon Viscott/courtesy of the city of West Hollywood)

Ivy Bottini, a longtime West Hollywood resident and artist who spent more than five decades fighting for lesbian and women’s rights, died on Feb. 25. She was 94.

Her death was announced by members of the West Hollywood City Council, including Mayor Lindsey Horvath, who ordered the city’s flags to be flown at half-staff starting on Monday, March 1 – also the first day of Women’s History Month.

“Luckily, Ivy called [West Hollywood] home for decades,” Horvath wrote on Twitter. “We are grateful for her imprint on our city and the fight for full equality for women and LGBTQIA community. I’m incredibly lucky to have had a personal relationship [with] an icon who blazed trails for generations to come. Her artwork hangs in my home, her voice shows up in my thoughts, her spirit will always be in my heart. … May she rest in power.”

Bottini was born in New York City and discovered a passion for graphic design and artistry while attending the Pratt Institute School of Art. She worked as a graphic designer and illustrator, including 16 years for Newsday, a position she held until her move to California in the early 1970s.

She married her husband, Edward Bottini, in 1952. They had two daughters, Laura and Lisa. She stayed with her husband for 16 years, despite knowing early on in her life that she was attracted to women.

“The week before our wedding, I suddenly couldn’t swallow. It was like somebody had me by throat,” Bottini said in an interview with the Lavender Effect, an organization that advances the future of LGTBQ+ heritage and culture, where she served as a founding advisor.

She said the doctor told her it was psychological and sent her to a psychiatrist. She told him that she thought she loved women, and he responded by telling her to get married and “cleave unto your married friends.”

“I just kept falling in love with women,” she said in the interview, which was uploaded six years ago.

It was during her time in New York City that she was introduced to the National Organization for Women, with whom she helped found the New York City chapter in 1966. In 1970, she famously led a group of women to the Statue of Liberty. After ferrying to the statue, they removed fabric that they had stuffed under their dresses and hung a large banner over the statue’s pedestal that said, “Women of the Word Unite.”

She elevated to the role of president, but in 1970 she was forced of the organization after coming out as a lesbian and pushing for lesbian rights. In 2016, NOW rectified the decision and sent her a letter apologizing for the way she was treated.

“The NOW community is deeply saddened by the passing of LGBTQ and feminist icon, Ivy Bottini,” the group posted on Twitter. “In 1966, Ivy co-founded the first chapter of NOW and created our iconic NOW logo. Much of her efforts have brought us to this point, and we will continue the fight.”

After she moved to California, Bottini helped lead campaigns against the discrimination of LGBT workers, organized LGBT rights marches and protests and fought to get funding and services during the AIDS epidemic. She founded the city’s first AIDS organization, AIDS Network L.A., and she co-founded AIDS Project L.A. She also founded the Los Angeles Lesbian/Gay Police Advisory Board. She was co-chair of the West Hollywood Lesbian and Gay Advisory Board for 11 years and founded the nonprofit Gay & Lesbian Elder Housing, Inc. in 1993. She also briefly served as the Los Angeles LGBT Center’s director of women’s programs.

“Today Ivy Bottini died at the age of 94, and our community lost a tireless activist and queer community shero,” L.A. LGBT Center CEO Lorri L. Jean said in a statement. “Once Ivy overcame years of struggle to accept her lesbianism, she never hesitated to express her opinion and never ceased her efforts to make the world a better place for LGBT people. Rest in peace, Ivy.”

After the 9th Circuit Court of Appeals ruled that Proposition 8, the initiative that banned same-sex marriage in the state, was unconstitutional, Bottini was among the many supporters of same-sex marriage who jubilantly marched in the streets of West Hollywood. 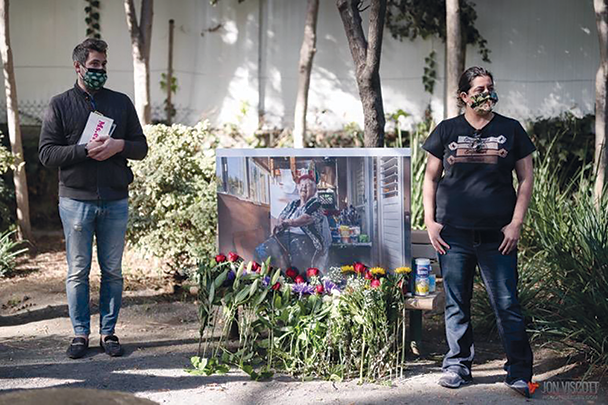 Members of the West Hollywood Council read from Ivy Bottini’s memoir during a memorial service for the long-time activist last weekend. (photo courtesy of John Erickson)

“The results of this decision and the results of what it is going to do are so historic,” Bottini told the Beverly Press in 2012. “Having worked on this for over 50 years, this is a moment I have never experienced. I am happy for the people who want to marry. It says, ‘I am equal, I deserve this and I am a human being’.”

She was a fixture at West Hollywood Council meetings and served as a mentor for many members of the council, including Councilman John Erickson. He said that after his grandmother – who he called the most-influential person in his life – died shortly after he moved to California, Bottini stepped into that role and urged him to run for council.

“When Ivy said to do something, you usually do it because you don’t want her coming to council and screaming at you,” he said. “There are so many ways in which Ivy took on that role as a mentor that my grandmother did. … It’s truly important that we all recognize and remember who she is and what she did.”

He was among the members of the council who held a service for Bottini this past weekend across from her longtime home, where they read excerpts from her memoir, “The Liberation of Ivy Bottini: A Memoir of Love and Activism.” Other council members paid tribute with statements.

“When I think of Ivy Bottini, I can’t help but think of the Frank Sinatra song, ‘My Way.’ Ivy fought for what she believed in,” Councilwoman Lauren Meister said. “Whether it was women’s rights or the rights of the LGBTQ community, she was all in. She was a powerhouse and an inspiration. She gave it her all. And she did it her way.”

“Ivy was never about formal institutions,” Councilman John D’Amico said. “In fact, she purposefully worked outside the system to serve as a medium of institutional critique. A foil for the regular, an exception that proved the rule, a yes in the face of not ever.”

Councilwoman Sepi Shyne, too, said that Bottini was a leading supporter during her run for council and became a mentor after meeting with her at her home. During that meeting, Bottini grilled her about her most-important issues, including cost of living and women’s rights, before endorsing her.

“I haven’t had many lesbian mentors in my life, but she quickly became mine, as well as a dear friend. She touched so many people’s lives and created so much positive change. She is our West Hollywood Shero,” Shyne said.

During the council meeting, Shyne shared a story from Bottini’s final moments before her death in Florida, where she had been living in hospice care.

Shyne said that Bottini’s pastor came by, and Ivy pressed him on the church’s support for LGBTQ rights, the use of pronouns and better security for LGTBQ members, all issues she had been advocating for months.

The pastor agreed, she smiled and then she died, Shyne said.

“A true activist even in her last few seconds with us,” Shyne said.