Bloom honors Betty White as woman of the year 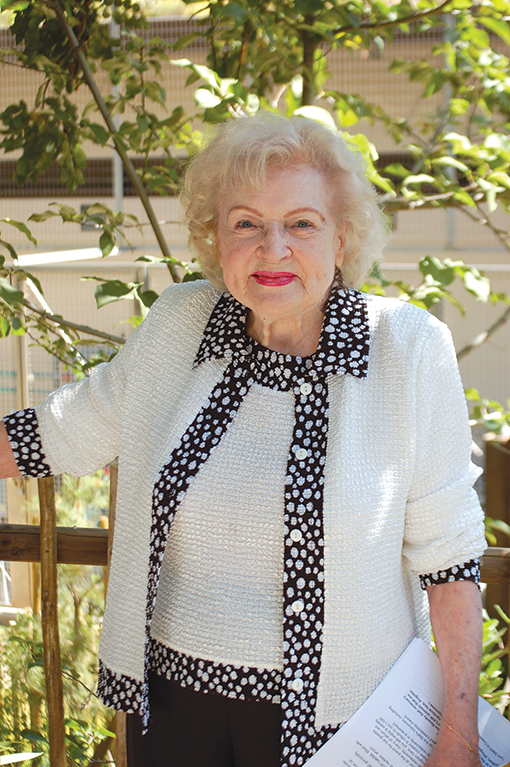 Actress Betty White, shown here at the Los Angeles Zoo, has been named Woman of the Year in the 50th Assembly District. (photo by Edwin Folven)

White received the award in recognition of Women’s History Month in a virtual ceremony on March 15, along with other women from across California who were also recognized by their state senators and Assembly members for their accomplishments and contributions to the state.

“Betty White is often called a national treasure. She is known not only for her prolific career in television, but also for trailblazing a path for women pursuing careers in television, and her staunch animal welfare advocacy,” Bloom said.

A seven-time Emmy Award winner, White is recognized as the first woman to produce a sitcom and was one of the first women to hold positions both in front of and behind the camera. A dedicated supporter of animal health and wellness, White is a trustee of the Greater Los Angeles Zoo Association and serves as president emeritus of Morris Animal Foundation, where she has been a trustee since 1971. In 2006, she was honored by the city of Los Angeles at the Los Angeles Zoo as Ambassador to the Animals for her lifelong work for animal welfare. She was proclaimed an honorary forest ranger by the U.S. Forest Service in 2010 and made an honorary zookeeper by the keepers of the Los Angeles Zoo, two occupations she considered as a child and before becoming an actress.

“I am surprised and honored to be recognized for Woman of the Year … It is good to be 99,” White said.

“Betty White represents the best of Hollywood and the business of entertainment. A staple on the television screen, she has brought laughter into the homes of generations of families. She is adamant on using her considerable platform to bring awareness to improving the lives of animals, and always with kindness, warmth and humor,” Bloom said.