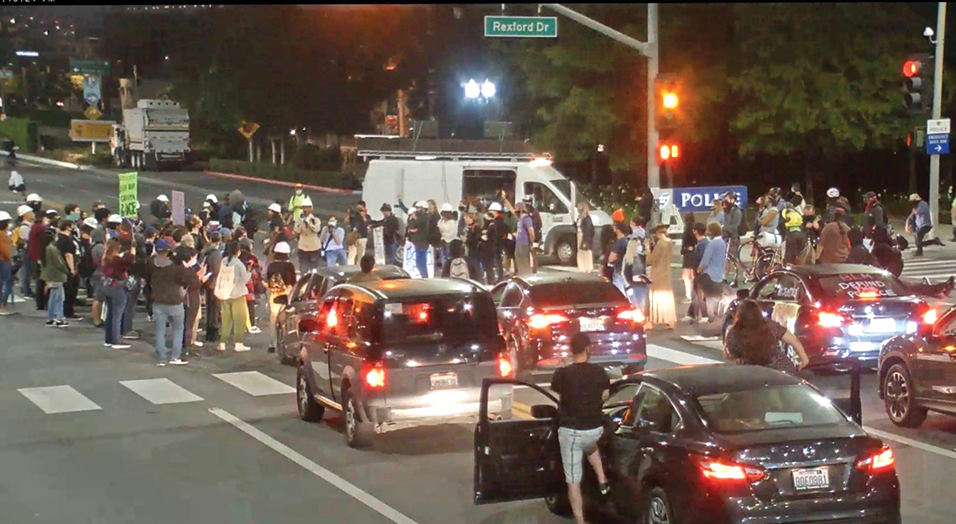 Windham’s ruling means that charges against the 25 people who were arrested in the city under the ordinance were dismissed. The defendants protested police brutality and racism on North Alpine Drive, a residential street, last summer after the death of George Floyd. Attorney Jeffrey Douglas, who was joined by co-counsel Bess Stiffelman in responding to the city’s arguments on behalf of all 25 defendants, said Windham did the city a favor in calling the “dreadfully, inartfully drafted piece of legislation” unconstitutional, thereby preventing a trial.

“We chose to save everybody, including the city of Beverly Hills, a lot of money, a lot of time, a lot of stress by getting this thing thrown out at the earliest opportunity,” Douglas said.

Douglas said the ordinance, which required groups of 10 or more people in residential areas at night to be silent, would not have produced a conviction even if the cases had gone to trial.

“This ordinance was truly extreme,” Douglas said. “It said that you had to be silent – not quiet, silent. If one person had coughed, if one person said to another person ‘what time is it,’ that’s a violation of the ordinance.”

In his decision, Windham said the city’s ordinance conflicted with the First Amendment rights of protest and speech.

“Requiring silence among groups greater than 10 substantially burdens their … speech. Ordinary speech is a protected activity,” he wrote.

Beverly Hills spokesman Keith Sterling said while Windham threw out the charges that were filed under the urgency ordinance last year, the city now has a permanent ordinance in place.

“The city’s permanent ordinance, which regulates nighttime demonstrations in residential areas and has been in effect since last fall, does not require silence, and we believe that it meets the constitutional requirements of the decision by Judge Windham,” Sterling said.

Mayor Lester Friedman said the decision on whether the city will appeal Windham’s ruling will be left up to the city’s prosecutors. Outside of the Los Angeles District Attorney’s Office, the city contracts with private law firms such as Dapeer, Rosenblit and Litvak to act as a city attorney’s office.

“The ordinance that was ruled upon was an emergency ordinance of a very short duration. It was changed and based on what the judge did say during the hearing, it appears that the ordinance we had replacing it, which we repealed a couple of weeks [after the initial ordinance was enacted], would have satisfied the requirements,” Friedman said.

Douglas said he does not believe the city will appeal the ruling, as “effort it would’ve involved to already take it this far is completely disproportionate to whatever offenses they fantasize were committed,” and he defended the protesters for taking a stand on civil rights.

“I have represented many people protesting many things over the years, and this group is particularly distinctive because of how committed and thoughtful and intentional as they are,” Douglas said. “That is, they are trying to affect change and they have a method to do it. These people are the hope of America. It’s people like this that move forward justice. We lionize civil rights protesters once it becomes history, 20 years later, 50 years later. When those leaders die, we treat them as heroes. We have to recognize that those heroes are among us now and the people who were arrested are those people, those heroes.”