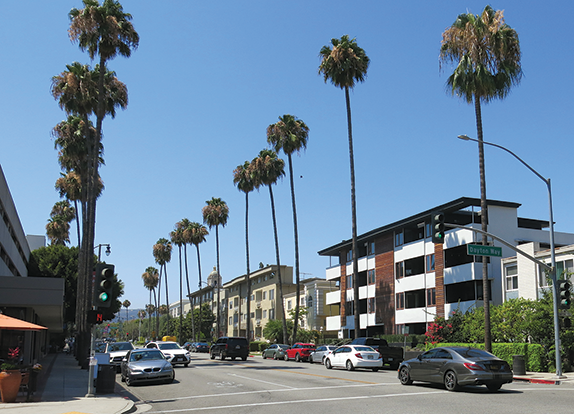 Some Beverly Hills landlords are refusing to accept money from rental relief programs so they can move to evict their tenants once the pandemic is over, according to city staff. (photo by Cameron Kiszla)

Beverly Hills plans to see how best it can protect its residents from eviction once the pandemic ends.

On March 2, the City Council discussed the city’s rent subsidy program. During a presentation by Helen Morales, the city’s deputy director of rent stabilization, the council members learned that 27 of the city’s residents who were approved to receive rental assistance had landlords who refused to accept the money.

Morales told the council that in conversations with some of these landlords, she and Susan Belgrade of Jewish Family Services, which administers the city’s program, learned that these landlords were advised by their attorneys to refuse the money so that, once the eviction moratoriums are lifted, they can evict their tenants. It is believed that the ultimate intention in some of these cases is to take rent-stabilized units and raise the rent to market prices after the eviction is complete, Morales added.

“They have an idea that they really just want to evict these tenants,” Morales said.

The council members said they want to see what can be done to help these 27 tenants in particular, many of whom are tenants of corporate landlords, according to Morales.

“[The tenants] have a target on their back, because otherwise, the landlords would take this money … Fortunately, it’s only 27, but that’s 27 of our residents feeling insecure,” Councilman John Mirisch said.

Mirisch suggested a specific ordinance could be drafted to address the issue.

“Should we create a rule that would not allow them to go to market after evicting someone for hardships in this specific case, the COVID case?” Mirisch said.

The proposal seemed to garner broad support on the council.

“We do need to look at it and see if there is something we can craft that can take away that incentive from the landlord so that they don’t utilize that for the purpose of evicting someone,” Mayor Lester Friedman added.

The council also received an update on the city’s rent subsidy program as a whole, which Morales noted has processed approximately half of the 480 total eligible applications that were sent to JFS for review.

“We’re hoping by the end of April we can get through this process with all of the applications we’ve received to date,” Morales said.

The city’s residents can apply to receive up to $3,000, though if they receive money from the county’s rent subsidy program, which provides up to $10,000, they’ll be ineligible to participate in the city’s program.

“We encourage people to apply to both … We will only deny [applicants in the city’s program] once they receive payment from the county,” Morales said.

Morales also explained to the council that, between the county program and applications from people who received additional benefits, such as unemployment, and thus were not eligible for the program, the city’s approval rate is only 23%.

“We all feel the effects of COVID-19, and as a result, everyone applied, but when you make a determination as to whether they were financially impacted, we didn’t see a reduction in income [for many applicants],” Morales said.

The city also plans to conduct more outreach so those who need help will be able to find it with the city and so those who are interested in applying will have a better idea of whether they are eligible. The city’s program stopped receiving applications in December, but city staff has been advised that more funding is anticipated for the county program.

“We should construct something relatively simple … so tenants and landlords both understand what their options are,” Councilman Julian Gold said. “We should construct something in lay language that explains the state programs and our programs … Any communication methodology we have, we should use to make sure people understand what this is and how to get help.”