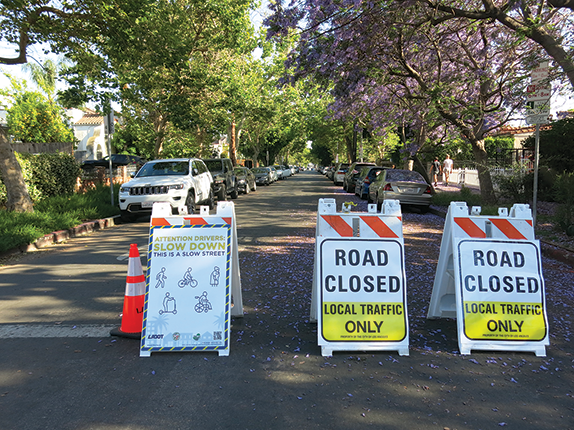 A Slow Streets program in Los Angeles allows local traffic, but otherwise preserves the street for residents and neighbors to exercise. (photo by Cameron Kiszla)

The Beverly Hills City Council on March 2 unanimously expressed support for bringing a Slow Streets program, which would place signs on blocks of residential streets to discourage car traffic so residents can walk, run, bicycle and play in a safer area, to the city.

The concept has been implemented in nearby areas, including Los Angeles, and typically allows for residents and vehicles making deliveries to travel to the included streets while encouraging those vehicles to slow down and drive carefully. Signage for the Slow Streets program incentivizes drivers seeking to utilize the streets as a cut-through to find an alternative route.

“It’s a low-cost, short-term strategy to reduce both the volume and speed of traffic on streets,” said Daren Grilley, city engineer.

The council members expressed unanimous support for the city’s plan, especially as it requires the program to be initiated by a resident of the area and for a majority of the residents of a Slow Street to sign off before it is implemented. In addition, Grilley noted, the sponsor or a neighborhood watch will be responsible for keeping track of the Slow Streets and bringing any problems that arise to the city’s attention.

“We’re just asking for someone to be our eyes and ears, let us know if there are issues … Give us a heads up so we can make changes,” Grilley said.

Councilman Julian Gold supported Slow Streets, though he was the most reticent of the five council members. He proposed potentially starting with five blocks or so for the pilot program.

“The unintended consequences [due to people gathering] are a little concerning, but I’m OK with trying this,” Gold said.

The other four council members, however, suggested the program could be more widely implemented.

“I am extremely supportive of this. This is happening all over Los Angeles … I think it’s about time that we explore that, and for me, since this is resident-initiated, I think that’s already half the battle,” Councilwoman Lili Bosse said.

Vice Mayor Robert Wunderlich pushed back on some of Gold’s concerns, such as that the streets would become gathering places.

Grilley also disputed that people were likely to congregate in the street and made clear that the intention was for the Slow Streets to be used by residents and neighbors.

“It is a public space, but we aren’t encouraging it to be a gathering place for others. Perhaps from the next street over, but we’re not encouraging people to drive over from the other side of town,” Grilley said.

“I think this is great and it should not just be something that happens during COVID,” Councilman John Mirisch added.

“It provides an opportunity for people to experience something,” Wunderlich added. “Depending on the feedback we get and if it’s positive feedback, we should explore extending it past the pandemic period.”